During the second day of the 19th FINA World Championships in Budapest Hungary, the slogan “Make History” continues to be front and center. In the Artistic Swimming Duet Technical Final event, each step of the podium was occupied by a set of twins.

The Duet competition often sees twins, or in the case of Austria triplet sisters, participating. There seems to be an edge that identical sisters have when competing as duet partners. However, the results today at the Hajos Alfred Swimming Complex on Margaret Island was a first, with only twin and triplet sisters taking home the medals.

After finishing second in the last five FINA World Championships, China’s pair Wang Liuyi and Wang Qianyi clinched the first gold medal for China in Budapest. During the routine “Gamers” swum to the song “Naval Commandos” by Elliott Leung, the 25-year-old twins, showcased difficult hybrids and very rapid leg movements throughout the choreography which earned them 93.7536 points.

“It is a great honour to stand on the top of the podium at a World Championships. We think that Budapest is our lucky place, we really love to be here and we are really happy right now. We were satisfied with our performance and luckily the judges also appreciated our unique routine.” 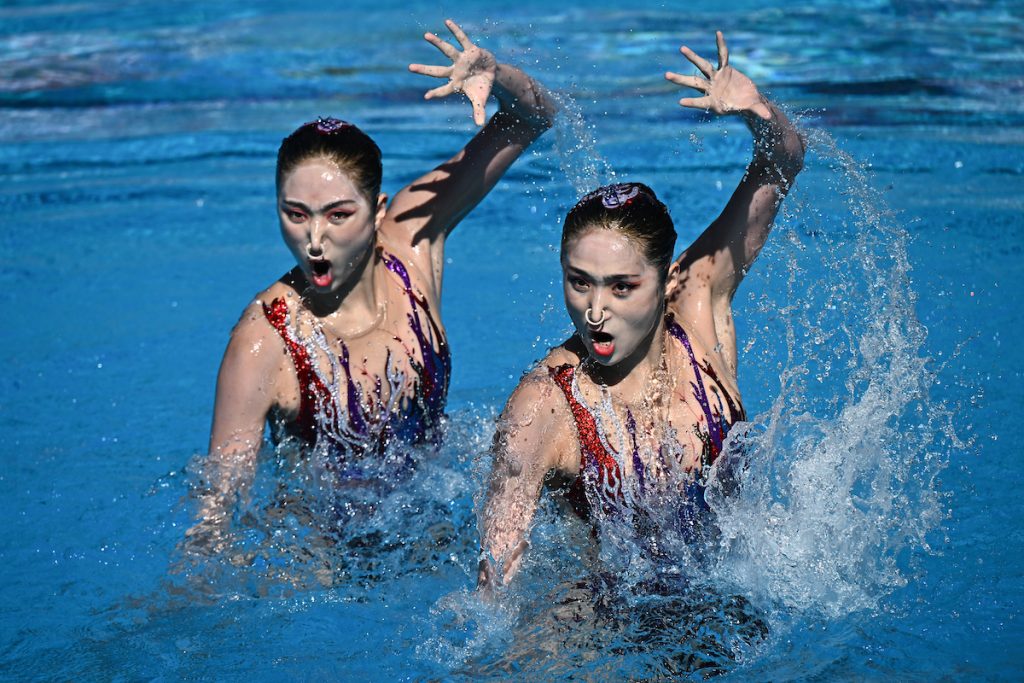 After finishing second in the last five FINA World Championships, China’s pair Wang Liuyi and Wang Qianyi clinched the first gold medal for China in Budapest. During the routine “Gamers” swum to the song “Naval Commandos” by Elliott Leung, the 25-year-old twins, showcased difficult hybrids and very rapid leg movements throughout the choreography which earned them 93.7536 points.

“It is a great honour to stand on the top of the podium at a World Championships. We think that Budapest is our lucky place, we really love to be here and we are really happy right now. We were satisfied with our performance and luckily the judges also appreciated our unique routine.” 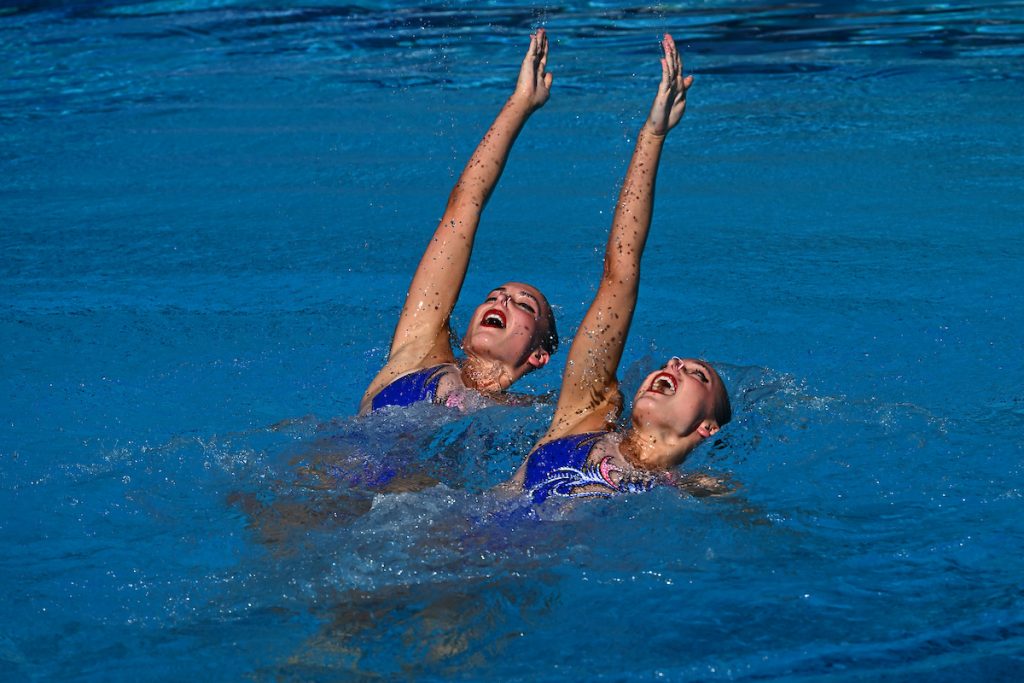 In a very close race that was not decided until the very end of the competition, Ukraine’s Aleksiiva sisters, Maryna and Vladyslava claimed the silver with 91.8617 points. Winner of the bronze medal in the Tokyo 2020 Olympic Games, this the first silver medal for Ukraine in the Duet Technical event. The relevant “Royal Blood” routine the Aleksiiva twins performed was an emotional exhibition of the Ukrainian situation and their desire to return home.

“Despite we did not manage to win the gold medal we are really satisfied with the silver as this was our first senior World Championships. We tried to do our best and today it was worth a silver medal. We would like to dedicate this result to our strong country, Ukraine.”

Another first happened for the Austrian pair of triplet sisters, Anna-Maria Alexandri and Eirini Alexandri who won the first World Championship medal for Austria in Artistic Swimming. The Alexandri sisters performed their “Warriors” choreography to music by the same composer as the Chinese duet, Elliott Leung, to score 91.2622 points for the bronze medal.

“We are so relieved and empty, we can’t think of anything right now. We are so happy and it is a dream that came true. We came here and knew it was going to be difficult. We never expected this, only dreamt about it.”

The finalists for the Team Technical event, which will be contested on Tuesday June 21, were determined today in the preliminary round. After having finished in second place at the last three FINA World Championships, the team representing China leads the way to the gold medal after the preliminary round. Japan, with one silver and two bronze medals at previous editions of the FINA World Championships follows right behind. However, the podium on Tuesday could feature the teams from Italy, France, United States or Greece, none of which have won a medal in this event at the World Championships.

The program for Monday June 20th includes the preliminary round for the Solo Free event and the Mixed Duet Technical and Free Combination events. Full results of the Championships can be found here as well as information for the live broadcasts. 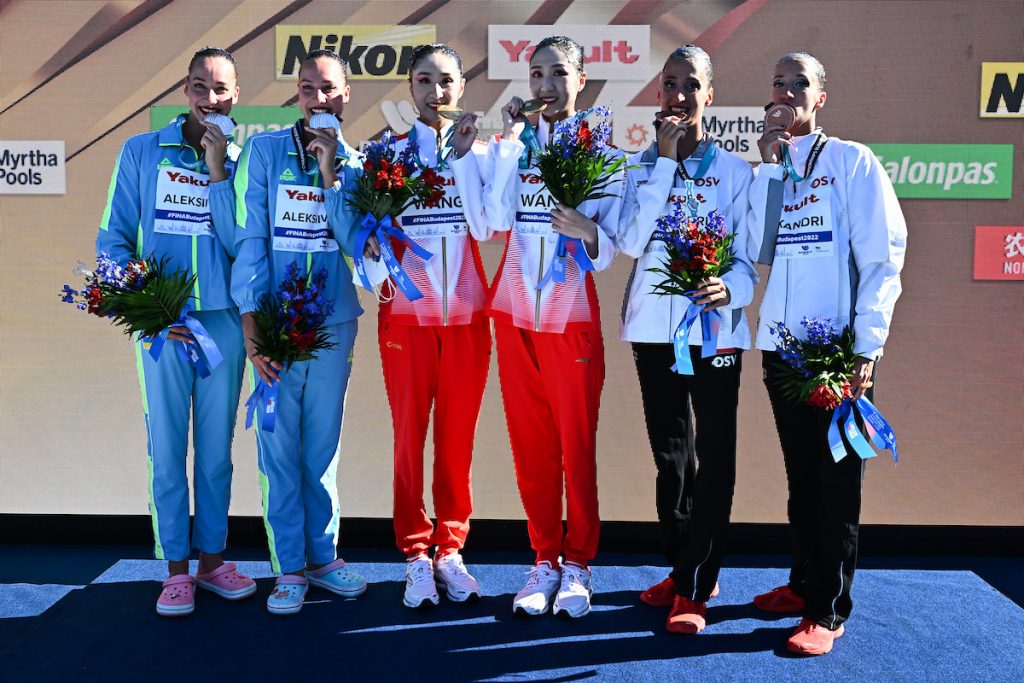 The United States of America dominated the second night of competition from the 2022 FINA World Championships in Budapest with three of the four gold medals going to the stars and stripes. Brazil’s Nicholas Santos broke his own record as the oldest Worlds medalist at age 42, while one of Hungary’s favourite swimmers, Katinka Hosszu saw a huge ovation as she exited the pool in the 200 IM.

Men’s 100 Breast – Nicolo Martinenghi Takes World Title in Adam Peaty’s Stead to Remain Fourth All-Time
When world record holder and superstar Adam Peaty announced he wouldn’t be competing at this year’s Worlds due to a foot injury, it left the door wide open for a new champion to take the throne. Peaty had won the last three World titles in the event and the last two Olympic golds, an undefeated run that began in 2015.

With Peaty out of the picture, it looked like one of the Europeans – either Italy’s Nicolo Martinenghi or the Netherlands’ Arno Kamminga, or American Nic Fink, would take the World title in 2022.

Martinenghi, who trains with coach Marco Pedoja, won his first major international gold, backing up his Olympic bronze last year. Even with no Peaty in attendance, he is confident in himself the next time they will race. 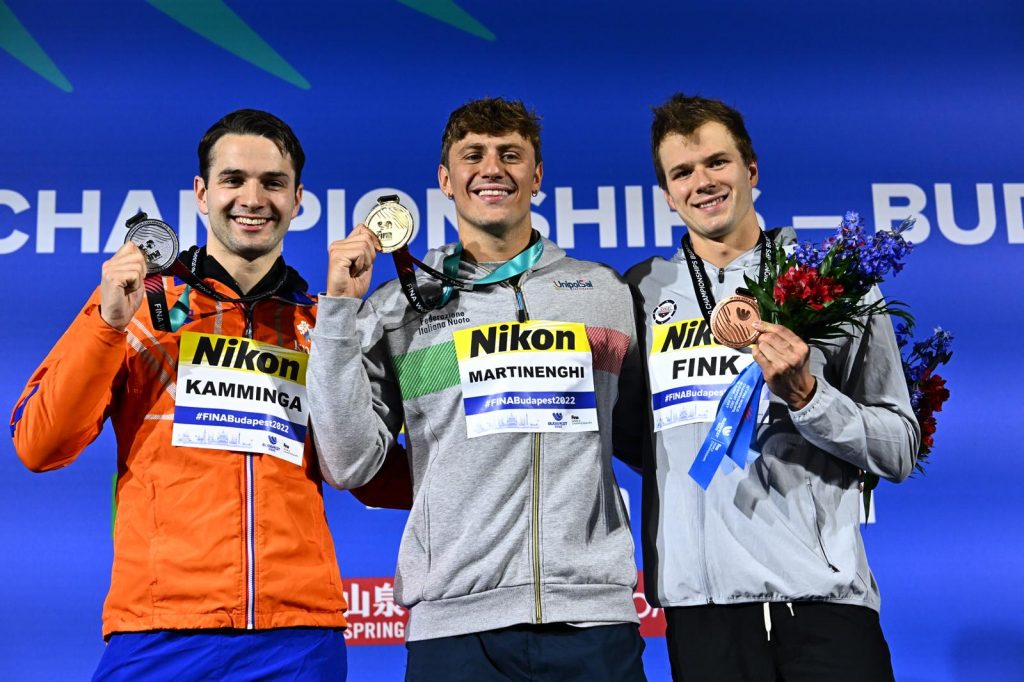 Martinenghi’s time of 58.26 improved on his Italian record as he remains fourth all-time. This is Italy’s first gold medal in the men’s 100m breaststroke at the world aquatics championships and its most recent medal in this event was a bronze by Fabio Scozzoli in 2011.

This is Kamminga’s first Worlds medal of his career as the last Dutch male swimmer to compete in the final of the men’s 100m breaststroke at the world aquatics championships was Ron Dekker in 1991.

This is also Fink’s first individual Worlds medal as this is his fourth trip to the meet at age 28.

The Duna Arena has been a special place for American Torri Huske. In 2019, she made her international debut with a gold medal in the 100 butterfly at the World Juniors in Budapest, which was the catalyst for her senior career.

Huske followed that up three years later, seemingly not missing a beat, in the same pool, with a gold medal in her first Worlds at the senior level. Huske, who trains with coach Greg Meehan at Stanford University, was under world-record pace at the 50 turn, as she broke her own American record with a 55.64 to remain fourth all-time. 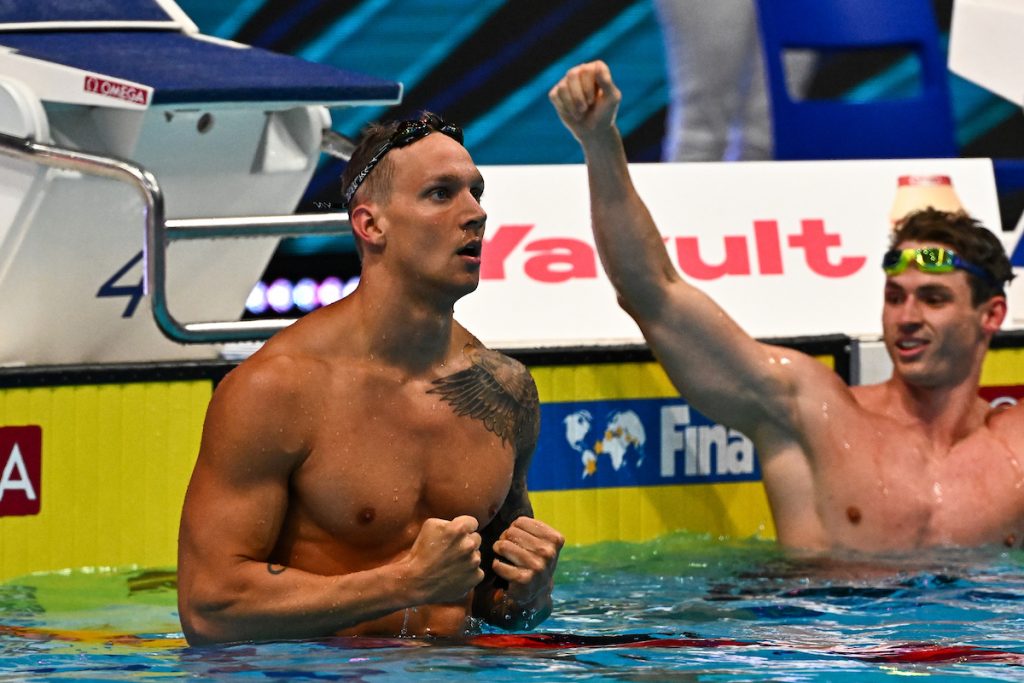 China’s Zhang Yufei, who won silver in Tokyo last year, won bronze here with a 56.41. Zhang had been a bit of an unknown this year, having not raced as much due to China’s strict COVID protocols.

This is China’s eighth Worlds medal in the 100 fly, tying the national record for most medals in an event.

American Caeleb Dressel won his 15th career gold medal in the 50 butterfly, the fourth most all-time for swimmers at the FINA World Championships. The pre-race hype was all focused on how any of the eight swimmers were capable of winning the one-lap event, with the entire field being separated by 0.28 seconds.

But just like he always does in a way that almost seems routine, Dressel found a way to get his hand on the wall first at 22.57. It wasn’t a best time, but it backs up his gold medal from 2019 and brings the second gold medal to the University of Florida group led by Anthony Nesty.

Dressel also shared the podium with fellow American Michael Andrew, who won his first individual medal at the World Championships with a bronze here at 22.79.

Andrew, age 23, finally reaches the podium after a haul of five medals at the 2017 World Juniors. With so much promise, he finally delivered, and it gives him plenty of confidence heading into his next event, the 50 breaststroke tomorrow morning.

42-year-old Nicholas Santos raced to the silver medal – a 22.78 to capture his fourth straight medal in the event at Worlds. Santos is the oldest swimmer to win a Worlds medal, breaking his own record he set when he was 39 in 2019.

Santos’ only event was the 50 butterfly this week and he got the job done.

USA’s Alex Walsh showed complete domination over four laps of the pool, leading the 200 IM final from the outset to win gold at 2:07.13, improving her best time to put her fifth all-time.

This was Walsh’s first World title at age 20 after having a successful youth career where she was the 2019 Pan American Games gold medalist in the 200 IM.

Walsh, who swims for coach Todd DeSorbo at the University of Virginia, was also the first American champion in the 200 IM since Ariana Kukors in 2009, as Walsh upgraded last year’s Olympic silver medal to gold. 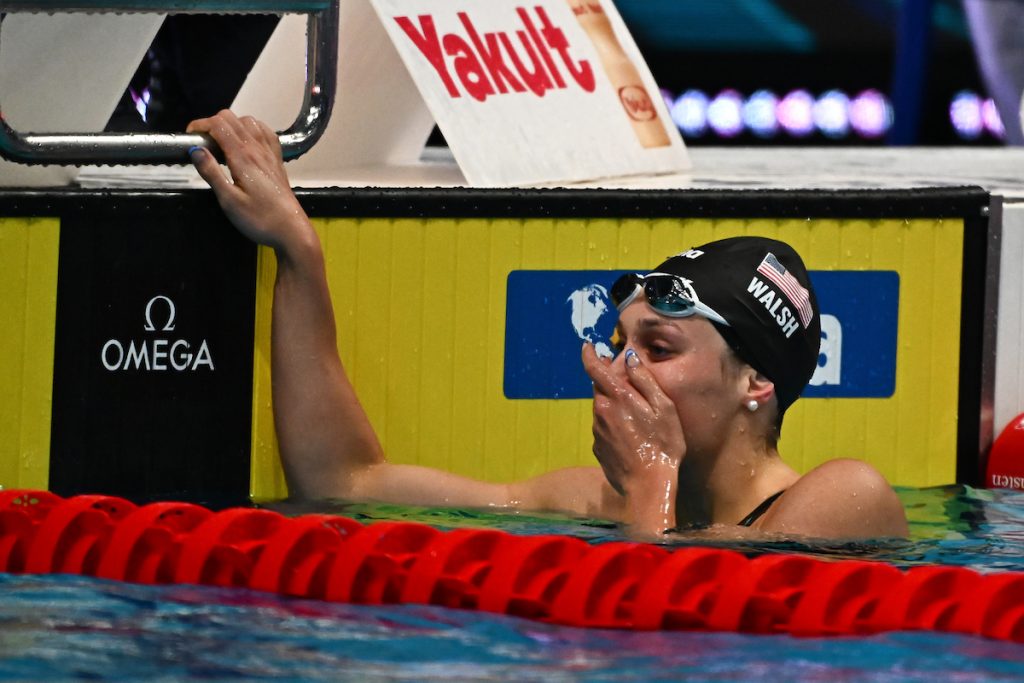 This was also the first time since 2011 that Hungary’s Katinka Hosszu was not World champion in this event. Hosszu, age 33, had not indicated whether this was her last Worlds, as she finished seventh tonight at 2:11.37. She took a moment to acknowledge the Budapest crowd after the race, who had to be told to quiet down before the start because of their cheering for their favorite swimmer. Hosszu had won the last four World titles in the event as the streak ended, but she will keep her world record as her career seems to be coming to a close after she said in an earlier interview that she was not expecting to swim in Paris at the next Olympics.

Hosszu’s competitors paid their respects to the world record holder.

Australia’s Kaylee McKeown won the silver medal with a 2:08.57 after she surprisingly scratched the heats of the 100 backstroke this morning, an event she currently holds the world record in. The decision to scratch was to focus 100% on the 200 IM final, where a medal was finalized when she touched the wall second at 2:08.57. McKeown had the fastest time in the world in this event a year ago before the Olympics but ultimately scratched to focus on the 100 back. A similar decision was made this year in favor of the 200 IM. It wasn’t a best time for the 20-year-old, but it was her first international medal in an IM event.

That was Australia’s eighth Worlds medal in the event without ever claiming gold. 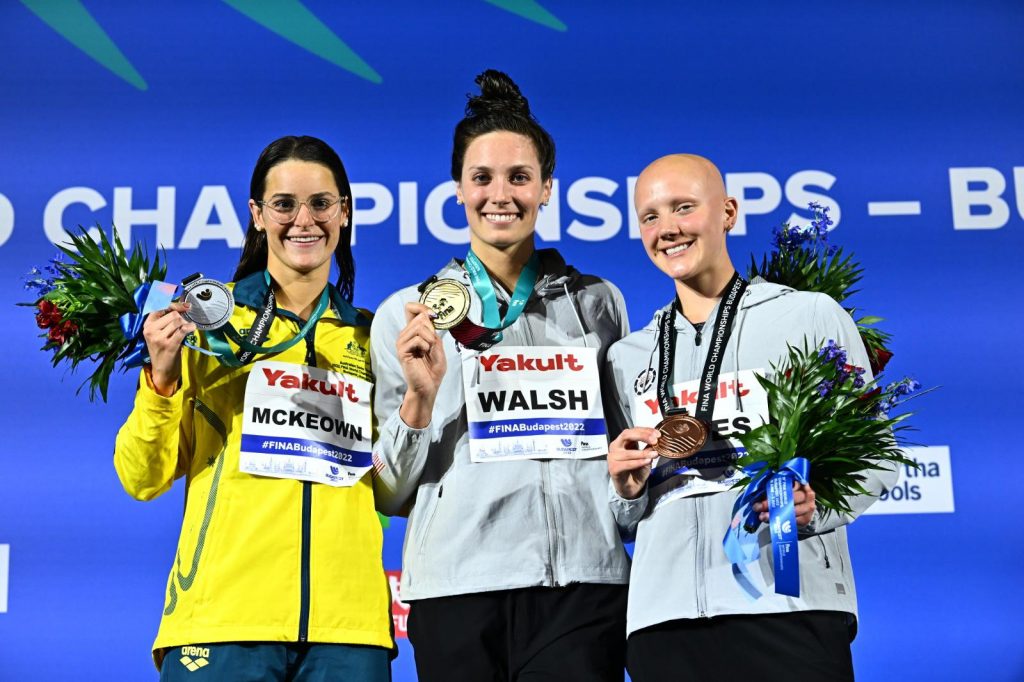 USA’s Leah Hayes finished with the bronze medal at 2:08.91 to break the world junior record of 2:09.57 set by China’s Yu Yiting last year at the Olympics.

Hayes, just 16, is going to be a junior in high school in the fall, and has asserted herself as one of the young talents in international swimming as she dropped a full second on her best time from earlier this year. She is the third youngest on the USA team for Budapest and the second swimmer to set a world junior record tonight (after David Popovici in the 200 free semis).

With Walsh and Hayes on the podium, the United States claimed multiple medals in the event at a single Worlds for the second time, after taking first and second place in 1978.