Germany’s Florian Wellbrock, the reigning Olympic Marathon 10km champion was the quickest of the 63 men that entered in the Men’s 5km open water race. Wellbrock covered the 5km distance in 52.48.8 and added a fourth medal from the 19th FINA World Championships to his trophy case.

Less than 24 hours after Wellbrock anchored his nation’s Mixed 4x1500m Team Relay to gold at Lupa Baech, the 24-year-old Germany again stood alone atop the medals podium for his first individual gold medal of the Budapest 2022 edition of the FINA World Championships.

The Bremen native’s campaign has also included a silver in the 800m and a bronze in the 1500m pool events so far at this championship.  With the two gold medals at Lupa Beach, Germany has now recorded 15 world championship golds in its history and swelled the total number of medals to 42 in open water swimming events.

The determination of Italian challenger Gregorio Paltinieri was admirable as he matched the German ace through the race until the final push for the home on the third-of-three 1.67km race laps.

Paltrinieri, a multi-time Olympic and FINA World Champion, put himself in position for another title as the German and Italian put open water between themselves and the rest of the field before finishing 3.9 seconds after Wellbrock’s arrival. 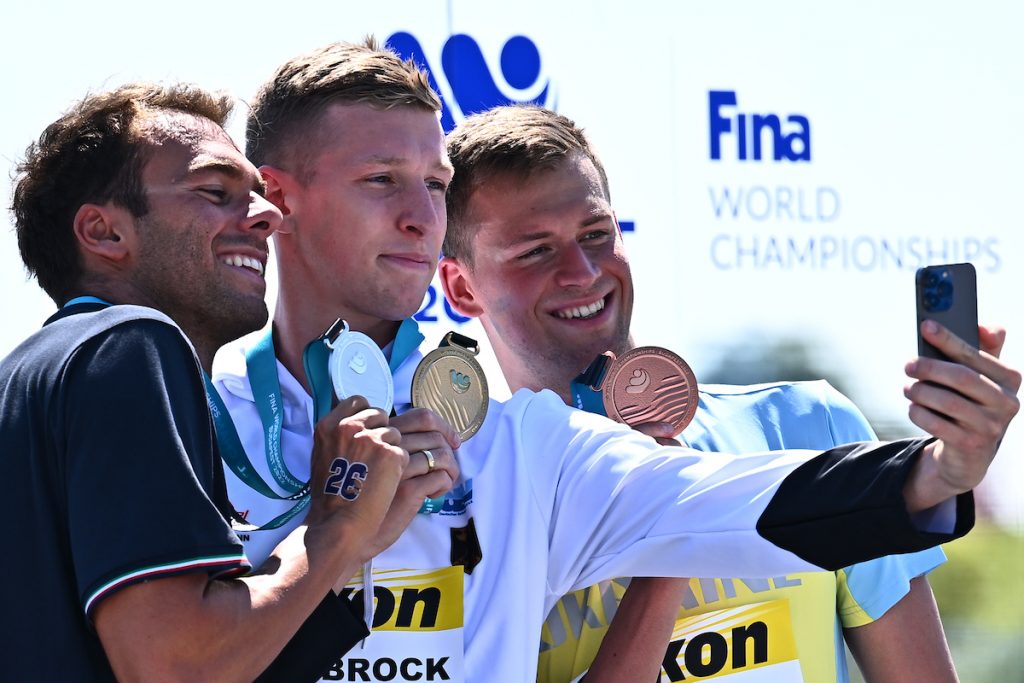 Another familiar face, Ukraine’s Mykhailo Romanchuk, completed the medals podium. After pushing a hard opening pace that left the field swimming in a mostly strung-out, single-file position not long after the start, Romanchuk finished the race 25 seconds behind his new German training partner but free of the other medal hopefuls.

The traditions for Ana Marcel Cunha at the FINA World Championships open water events go something like this: add vibrant colours to her hair, win the race, and then do pull-ups on the Omega touchpad suspended above the finish line.

The tradition continues: For the opening individual event of the 19th FINA World Championships – the Women’s 5km – the Brazilians mix of endurance and pure finishing power proved once again to be the winning combination, stopping the clock at 57:52.9 ahead of rest of the 50-racer field.

Cunha started her international campaign at the 2010 FINA World Championships by earning a bronze medal in Roberval, Canada. Coming in as the defending open water 5km champion,

Aurelie Muller of France finished in second place, less than one second behind Cunha. The French swimmer swam in the inaugural Olympic Marathon 10km at the 2008 Beijing Olympics finishing in 21st place.

Evidence of their longevity and commitment to open water swimming, both Cunha and Muller competed in the inaugural Olympic Marathon 10km at the Beijing 2008 Olympic Games. Cunha finished in fifth and Muller in twenty-first.