There has been a lot of hype surrounding 15-year-old Summer McIntosh in the lead-up to the World Championships this year as one of the future stars of the sport.

At 14, she made the Olympic final in the 400 freestyle and finished just off the podium in her first-ever international meet.

At 15 she swam the fastest 400 IM time in six years. And now just two months before her 16th birthday, McIntosh is officially a world champion – taking the 200 butterfly on Wednesday night in the Hungarian capital with a 2:05.20. The time is a new world junior record, lowering her own record from the semifinals of 2:05.79.

McIntosh, who swims for coach Ryan Mallette, stayed controlled early, staying with the leader Zhang Yufei of China. Last year’s Olympic champion played to her strengths on the opening 100, with the only sub-1:00 first 100 at 59.68. But Zhang seemingly did not have the training that helped her to Tokyo gold last year, and McIntosh pounced on the third 50, splitting a 32.45 and taking the lead ahead of USA’s Regan Smith and Zhang, with USA’s Hali Flickinger lurking.

Smith had kicked out further than anybody, but it was not enough as McIntosh pulled away, splitting a controlled 32.58 as she became the youngest swimming world champion since Ye Shiwen won the 200 IM in 2011 at age 15.

Flickinger won the silver at 2:06.08 while Zhang won the bronze at 2:06.32. It’s Flickinger’s second straight silver after finishing runner-up in 2019.

Zhang was also the bronze medal winner in the 100 fly on Sunday night. Zhang is the first swimmer to claim a medal in both the women’s 100 and 200 butterfly at the same world aquatics championships since Australia’s Jess Schipper in 2009. 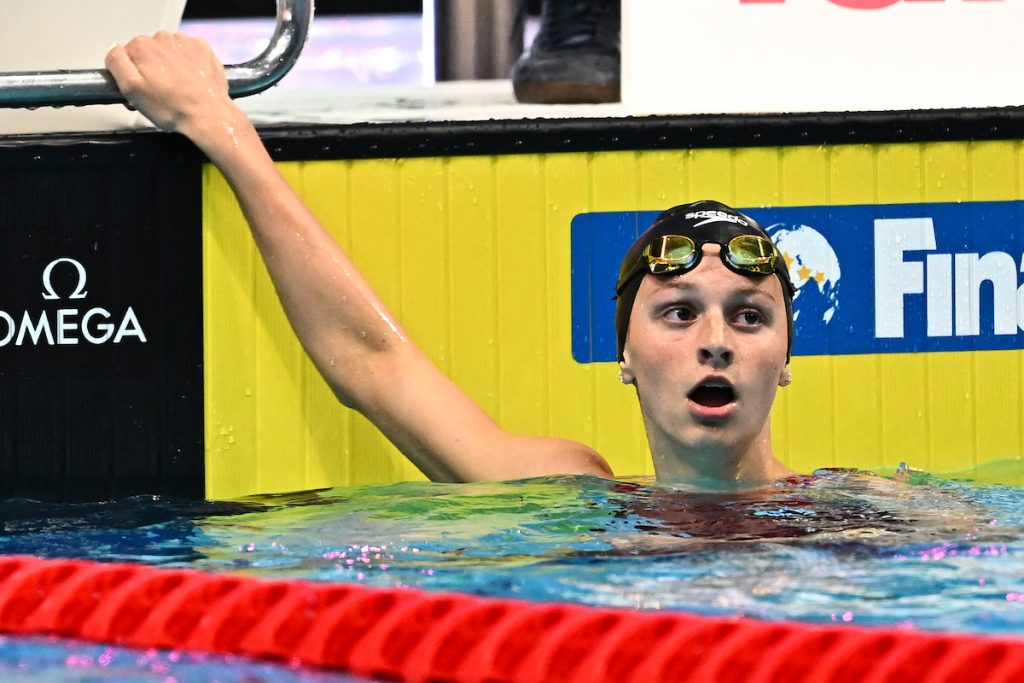 It may have been a letdown for swimming fans that were hoping to see Cesar Cielo’s world record erased from the history books – the 46.91 surviving multiple tests from the likes of Caeleb Dressel, Kyle Chalmers and most recently David Popovici of Romania.

The 17-year-old seemingly cruised to a 47.13 in last night’s semifinals, nearly 24 hours removed from the fastest 200 freestyle in ten years, with many believing that a world record was a definite lock for the star pupil of coach Adrian Radulescu.

Nonetheless, it was not to be on Wednesday night, with Popovici swimming a 47.58 to take the 100-200 freestyle double. But Popovici was challenged for everything he had, with France’s Maxime Grousset nearly pulling off the upset of the meet, which goes to show the aura already surrounding the 17-year-old kid, with many comparing him to the likes of Ian Thorpe.

Popovici is the second man to win the men’s 100m freestyle at the Worlds before his 18th birthday, after American Andy Coan won in 1975 at age 17. And surprisingly, the men’s 100-200 free double has only been done one other time – USA’s Jim Montgomery at the inaugural World champs in 1973. 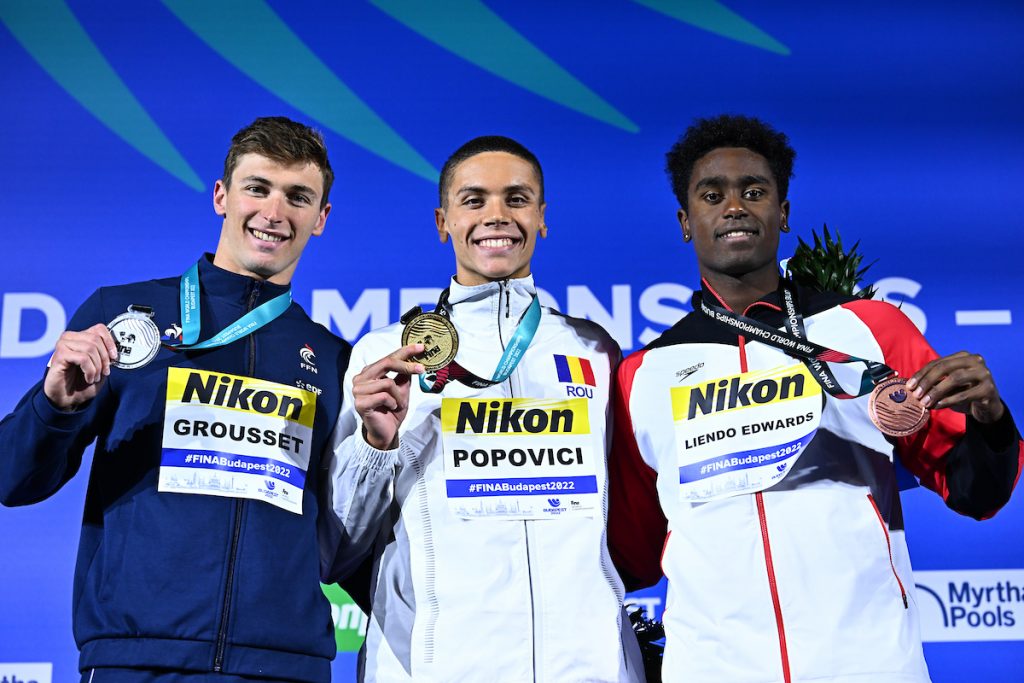 Grousset won his first major international medal with a 47.64 to win silver. After placing fourth at the Olympics last year, he won the first of France’s three medals on the night. The success of the French team – Grousset credits Leon Marchand winning the 400 IM on the very first night of finals.

He follows in the footsteps of some of the great French sprinters before him, including Olympic champion Alain Bernard, who Grousset said was his biggest inspiration.

Liendo, age 19, won his first individual medal at the global level, as he had won silver in this event at the 2019 World Juniors in this same pool, and it was one of Canada’s four medals won on the night.

The final notably was without the two-time defending World champion and the reigning Olympic champion Caeleb Dressel of the United States, who scratched out of the remainder of the championships on “medical grounds.” Dressel had won the 50 butterfly on Sunday night and led off the gold medal-winning 4×100 free relay with a 47.67.

Canada’s Kylie Masse returned to the gold medal days Wednesday night when she won the 50 backstroke final with a 27.31. It wasn’t a best time for Masse, but it adds to her silver from the 100 back on Monday, as well as the two gold medals she won in 2017 and 2019 in the 100 back.

Masse, who trains in Toronto with coach Ryan Mallette, had been in silver medal position for a while the last couple years, winning all three silvers at the World Short Course Champs in December and again the two individual silvers in Tokyo last summer. This was her first golden moment in nearly three years.

It was in this pool in 2017 that Masse broke the first world record of her career in the 100 backstroke.

It was hard to discern the winner with the naked eye, but USA’s Katharine Berkoff was right behind with the silver medal at 27.39. Berkoff wins the first long course Worlds medal of her career after a World short course medal in December.

The bronze went to France’s Analia Pigree, who won one of three medals for France on the night, bringing the total to six medals through five days, which matches the nation’s highest since 2015.

France may have just found its next swimming star in the lead-up to a home Olympics in two years time. 20-year-old Leon Marchand of France won the 200 IM gold medal in Budapest with a 1:55.22, doubling up in IM gold medals as he sits sixth all-time and second fastest European behind Laszlo Cseh (1:55.18).

Marchand follows up his 400 IM gold from Saturday, where he swam the fastest time in 14 years to get closer to Michael Phelps’ 4:03.84 than any man has ever before. Marchand’s gold here is his third of the meet, and France’s sixth overall through five days. He is also the second man representing France to claim a medal in the men’s 200 IM at the Worlds, after his father Xavier Marchand took silver in 1998.

Marchand, who swims for coach Bob Bowman in the United States, gives the French Swimming Federation some excitement as the Paris Olympics nears, but he made sure to shut down any Paris hype. 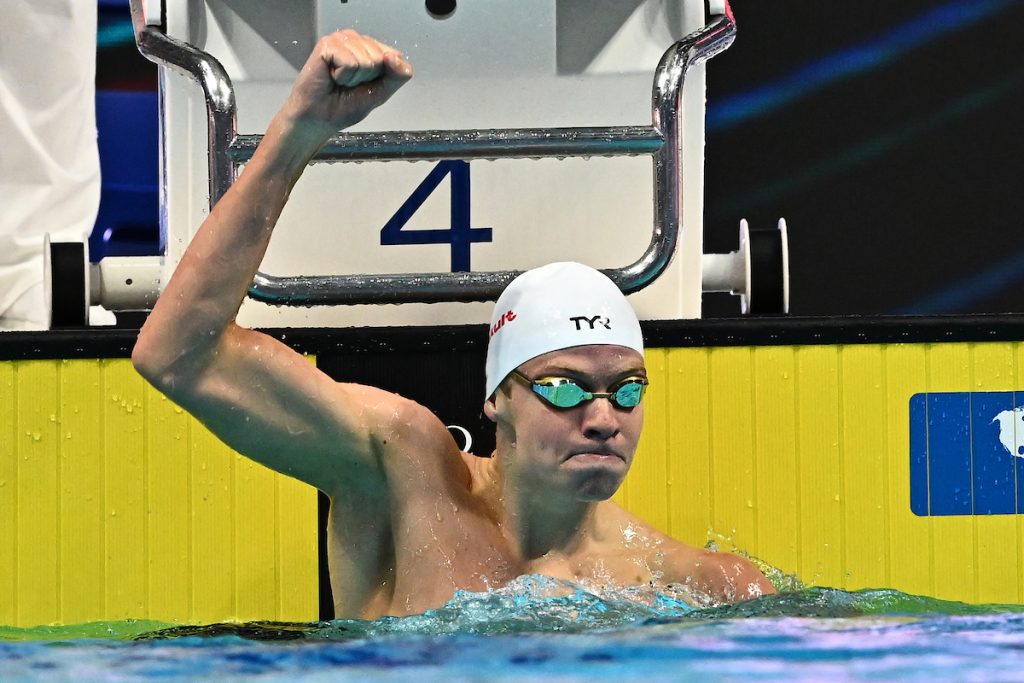 But there is excitement in the current day over the rest of the team’s performance in Budapest – the team has won six medals from four different swimmers.

Marchand won the final ahead of American Carson Foster, who also won silver behind Marchand in the 400. Foster moved up to 13th all-time with his 1:55.71, as he was leading at the 100 mark, before Marchand split a 33.01 on breaststroke to Foster’s 34.20. Marchand’s kick out on freestyle went to nearly 15 meters as the 20-year-old American could not catch him.

Marchand and Foster have been racing each other since their junior days, and are now the two best IM’ers in the world, taking the mantle from Daiya Seto and Chase Kalisz.

It was a race that was expected to come down to the wire, with the top four seeded teams from Australia, China, United States and Canada all vying for the three spots on the podium.

It certainly lived up to expectations early on, with Canada’s Summer McIntosh starting the race off with a new world junior record at 1:54.79, which was faster than the winning time in the 200 free.

The Australians pulled even, with Leah Neale splitting a 1:55.27. But on the back half, the United States pulled ahead and never looked back. 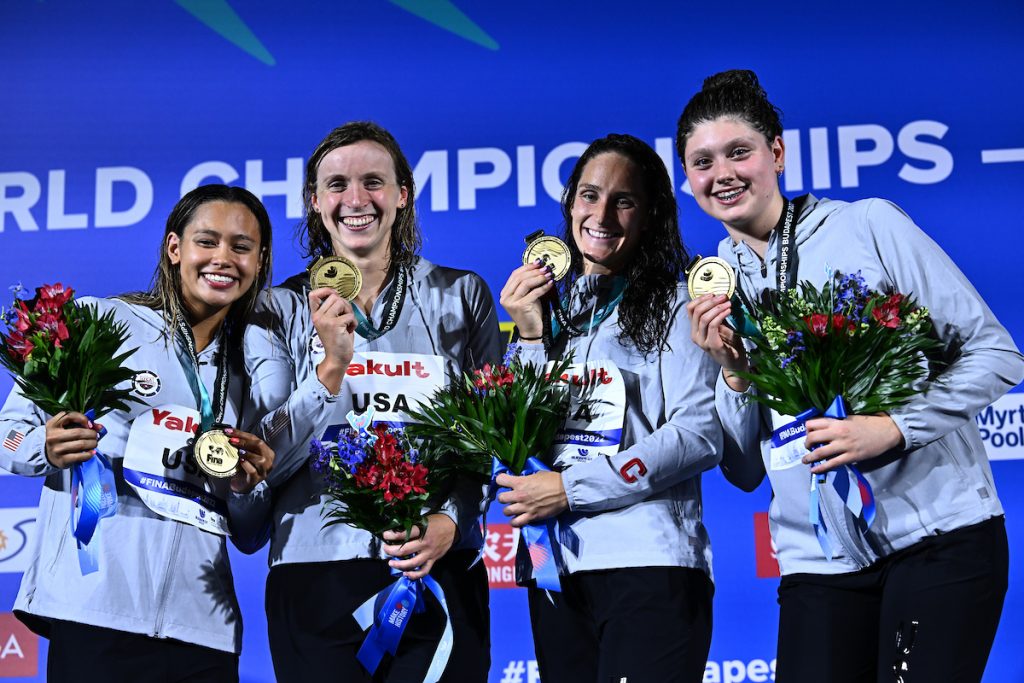 It was a new-look U.S. team than the one that won silver in Tokyo last year. Teenagers Weinstein (15) and Sims (17) swam in their first international finals, with Weinstein swimming faster than her 200 free individual.

Sims was put in the anchor spot, usually where Ledecky ends up, but the team had full confidence Sims could take on the likes of gold medalist Yang Junxuan from China, silver medalist Mollie O’Callaghan from Australia, and Olympic bronze medalist Penny Oleksiak from Canada.

After Sims’ 1:55 on the anchor this morning, the team put full trust in Sims that she was the best option to go last.