It was an amazing and really close game between the two undefeated teams. It was all about outstanding defence and goalkeeping. The first three quarters were all drawn and scoring just 1-1, 2-2 and also 1-1. Everybody felt that there is no difference between the sides. Both teams gave everything to deny all the scoring opportunities and sometimes the woodwork came to the rescue to toss the ball to the better side of the goal. In the last quarter, Serbia took the lead, but Australia had the last chance and scored the equaliser, but the referees cancelled it, so now only one team remained invincible.

All the keepers were amazing — Nick Porter (AUS) stopped 10 from 16 shots and Serbians Branislav Mitrovic (5/8) and Lazar Dobozanov (6/8) were both more than 60 per cent.

Australia was just centimetres away to equalise in the last minute of the match, but for its misfortune, a small fault was enough to cancel the goal for an amazing draw.

Both teams were awful in attacking, scoring 11 goals from 59 opportunities. From that 11 goals, five came from extra-men situations. Three players from Australia were out of the match after too many personal fouls.

Serbia has two wins now and will play against the easiest opponent in the group in the last round and heading to Budapest, while Australia will play against one of the bigger rivals and a decider just before the crossover.

United States of America started the game perfectly, only missed one shot and let in one goal, but in every other aspect it was perfect. In the second and the third periods, Kazakhstan found the rhythm and kept USA really close, losing by one goal in each of those quarters, while scoring three. In the last quarter, USA found the way back to how it started the match and kept a clean sheet, scoring five and now can focus on chasing second place in the group.

Dejan Udovicic’s men outscored Kazakhstan in the first and last quarters by 12 goals and conceded just one in those 16 minutes.

USA went more than 50 per cent in scoring with 17 from 30 attempts; converted seven from 12 in extra-man situations and 100 per cent from the 5m line.

That young Kazakhstan team is playing against really good and experienced teams in the group stage and can build on those opportunities and get better match by match. USA will face Australia in the last round in the group and should be prepared and focused after what the Aussie Sharks achieved against Serbia today.

Hungary went two from two in defeating Brazil by a handsome score that suggests it could now lay claim to strong medal possibilities. The loss to Croatia in the same pool five years ago still rankles. Hungary had all the artillery and used it frequently. With periods of 7-1, 4-2, 4-1 and 5-2, Hungary pleased the packed house who roared for every Hungarian goal. Brazil was stymied at almost every position and struggled hard for its goals, gaining two of the last three scores and the last two seconds from time.

Match heroes
Denes Varga (HUN) snapped up the player-of-the-match award for his excellent play and his smart tip-in score for the second goal. He scored once more and afterwards he spoke to the crowd that hung on every word. Old-stage Balazs Harai, at 35 one of the most senior players here and competing in his final world championships, scored twice. Rafael Real (33) snapped up two goals for Brazil, including a deflection that caught the goalkeeper off-guard. 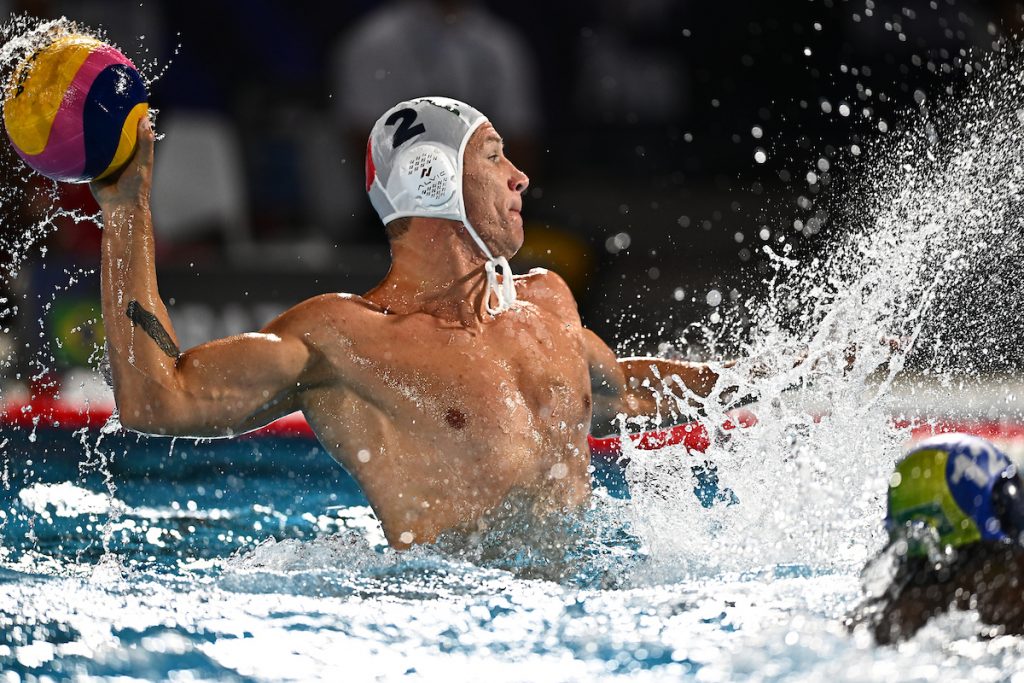 Turning point
What turning point? It was the opening whistle. Hungary went on a romp that had most players scoring and enjoying themselves as Brazil found just what it is like to compete at this level in Hungary.

Stats don’t lie
Hungary went five from 10 on extra-man attack and Brazil managed two from six, but this is not the statistic that counted tonight. It was the fact that Hungary shot 37 times to Brazil’s 22 that made the difference. Both Brazilian goalkeepers made six saves.

Bottom line
Hungary now needs to continue the rage against Georgia on Saturday and that could prove to be an even more interesting.

Someone forgot to tell Georgia you shouldn’t rain on the parade of the long-standing men’s water polo nations. Georgia downed Brazil 14-10 on the first men’s day and tonight came back from three down three times to level at four and eight, before succumbing 10-9 to Montenegro. What could have been a dour charge by Montenegro was an exciting, action-filled encounter in which Georgia laid realistic claims to a top-eight position. Montenegro led 4-1 at the first break suffered a goal-less second quarter for 4-4, shot to 7-4, 8-5, and only had an 8-7 advantage at the final break. Jovan Saric converted a penalty shot for 8-8 to start the final period. Man-of-the-match Bogdan Durdic blasted in his fourth goal on a booming counter and Vasilije Radovic scored from the deep right off a snap pass for 10-8 at 3:49. Andria Bitadze pulled one back off the right-post position on extra-man attack at 3:06 and the match was there for the taking. Georgia had an extra-man chance in the dying seconds and shot twice, only for Dejan Lazovic to stop each one with the last almost on the line to save the victory.

Match heroes
Durdic nailed three of his goals from the top at crucial moments while Dusan Matkovic had two in the bag by quarter time and Radovic’s pair in the second half helped get Montenegro over the line. Lazovic dragged down five balls in his short time in the pool. For the unlucky Georgia, Dusan Vasic scored three.

Turning point
A two-goal break late in the first, a three-goal burst in the third and the two-goal advantage in the fourth was Montenegro’s best moments. For Georgia, coming back thrice from three down was phenomenal and those three goals spanning the final break for 8-8 set the stage for a glory finish.

Stats don’t Lie
Georgia converted four from 12 on extra-man attack and Montenegro three from eight, showing that defence was the key to both teams’ play.

Bottom line
Georgia deserves to do well in Budapest and the showing tonight was outstanding. Montenegro received a shake-up but came through when needed. This is what the group play is all about.

The Spaniards had one goal — to score as many goals as possible and increase its goal difference. The Red Fury received an A mark in this exam, as it won 28-2. It was a spectacular and entertaining match between the sides. They tried to do their best to serve the crowd.

The man of the match was Alvaro Granados, who scored six goals from 10 attempts, he was really enterprising this night. In the Spanish goal in this match, Eduardo Lorrio was the first choice, he played during the whole match, and South Africa tested him a lot, but his performance was excellent, saving 10 from 12.

Now Spain can prepare for the biggest clash of the preliminary rounds against Italy, it’s going to be the rematch of the final of the 18th FINA World Championships men water polo tournament.

Croatia-Germany, two teams without victory in Group B. Both of them wanted to interrupt the negative flow and get the first two points in the second round. Just like against Japan, the Germans were not concentrating at the beginning, so the Croatians took the opportunity. Ivan Krapic shot twice in less than two minutes, getting a confident 4-1 lead after the first quarter. Nothing changed in the second period, either. Petar Porobic’s guys were sleepy, while Croatia was still on fire. At halftime, 8-2 seemed a clear victory for Croatia. After the turn, Germany woke up, getting into the water with a totally different way. Nice attacks, brilliant solutions, perfect shots and the team showed its real face. The Germans scored five times in the last eight minutes. On the other side, the opponent couldn’t react for a while. Then Andrija Basic arrived and calmed down the pool, getting back the four-goal difference. Croatia earned a well-deserved 13-9 victory, but with a better start, this must have been a harder game for them.

Basic – three from three. At the right time, at the right place. Needs no introduction why he earned the Player-of-the-Match award. Krapic’s performance was also notable just like Marko Bijac, especially in the first half. Despite the 13 goals, Moritz Schenkel had memorable periods in the German goal, while Lukas Kuppers was the best scorer with three perfect shots.

Quarter scores of 4-1 twice, 8-2 after 16 minutes. Too much advantage, impossible to clear it away against a team like Croatia.

Croatia converted eight from 14 in the extra-player situation, which was notable. On the other hand, three from three extra-player efficiency in the first quarter showed just how powerful and confident Croatia was at the start.

Germany has to learn to have a good start. Full-time concentration is advised for Croatia.

In the second match of Group B, unbeaten Japan met Greece, who had one point. Due to the draw against Croatia, there is still an open battle for winning the quartet and the Greeks knew they could not afford another stumble. Despite this fact, Japan scored first, but the answer didn’t wait long. Greece’s worldwide well-known superstars, Angelos Vlachopoulos, Ioannis Fountoulis and Konstantinos Genidounias, woke up the team. It continued in the second quarter, too. Theo Vlachos’ army gave up only two goals to Japan, preventing the Asians’ fast breaks and counter-attacks with strong defence. The attacking side also worked perfectly and various players extended the lead. The Olympic silvers medallist managed the second half brilliantly, too and there was no doubt who would grab the two points.

His name is Stylianos Argyropoulos – needs no introduction. The Greek icon scored six from six,. simply amazing! Credit goes to Emmanouil Zerdevas, too, entertaining the crowd with a 67 per cent save performance in goal.

As well as Argyropoulos 6 and Zerdevas with their heroics, Fountoulis went three from four in scoring and Vlachopoulos three from five.

Although Japan has good fighters, it was impossible to beat the well-qualified Greece. The Olympic silver medallist represents another level, however, the Japanese team is still a fresh spot on the map of water polo.