Australia might need to start listing women 100 freestylers as one of its biggest exports.

18-year-old Mollie O’Callaghan becomes the fifth Australian to be World champion in the 100 freestyle, joining the likes of Jodie Henry (2005), Libby Lenton (2007), Cate Campbell (2013), and Bronte Campbell (2015). Add in Emma McKeon’s gold from Tokyo last year and the Australians have a stranglehold on this event.

O’Callaghan relied on the strength of her back half, flipping sixth at the 50 at 25.96, and coming home in a 26.71, which was faster than anyone in the field by 0.69. O’Callaghan’s back half had turned a lot of heads in the semifinals, splitting 26.42-26.43 en route to the top seed, as she had earlier won silver in the individual 200 free on Tuesday as well.

O’Callaghan, despite coming in as the top seed, struggled with nerves.

O’Callaghan, who trains with coach Dean Boxall at St. Peters Western, won ahead of Sweden’s Sarah Sjostrom at 52.80 as she was leading at the 50 turn at 25.35. Sjostrom picked up her fifth straight medal in this event, winning four silvers and a bronze from 2019. Sjostrom also won her 17th individual medal at the World Championships. Only Michael Phelps has won more overall.

USA’s Torri Huske won the bronze medal with a 52.92, improving on her best time to win her fourth medal of the week, as she is the first swimmer to do so in Budapest. Huske also won gold in the 100 butterfly on Sunday.

But as of late, King has had more success in the 200 breaststroke, by evidence of her gold medal on Thursday night after missing the podium in the 100 on Monday. King swam a 2:22.41 to follow up her silver from Tokyo last year.

King swims for Ray Looze at Indiana University, who indicated to Swimming World Magazine she was not at her best this week. So winning the gold medal in the 200 meant just a little more to come back after a disappointing swim in the 100. The race did not feature Olympic champion and world record holder Tatjana Schoenmaker, but King can officially call herself a 200m breaststroke world champ for the first time.

The silver went to Australia’s Jenna Strauch at 2:23.04 as she picked up her first Worlds medal.

Strauch, age 25, had come back from illness to win Australia’s first breaststroke medal at Worlds since Leisel Jones in 2011.

The United States also picked up a bronze with Kate Douglass at 2:23.20. Douglass’ bronze makes the USA the first nation since China in 2001 to win multiple medals in the women’s 200 breaststroke. 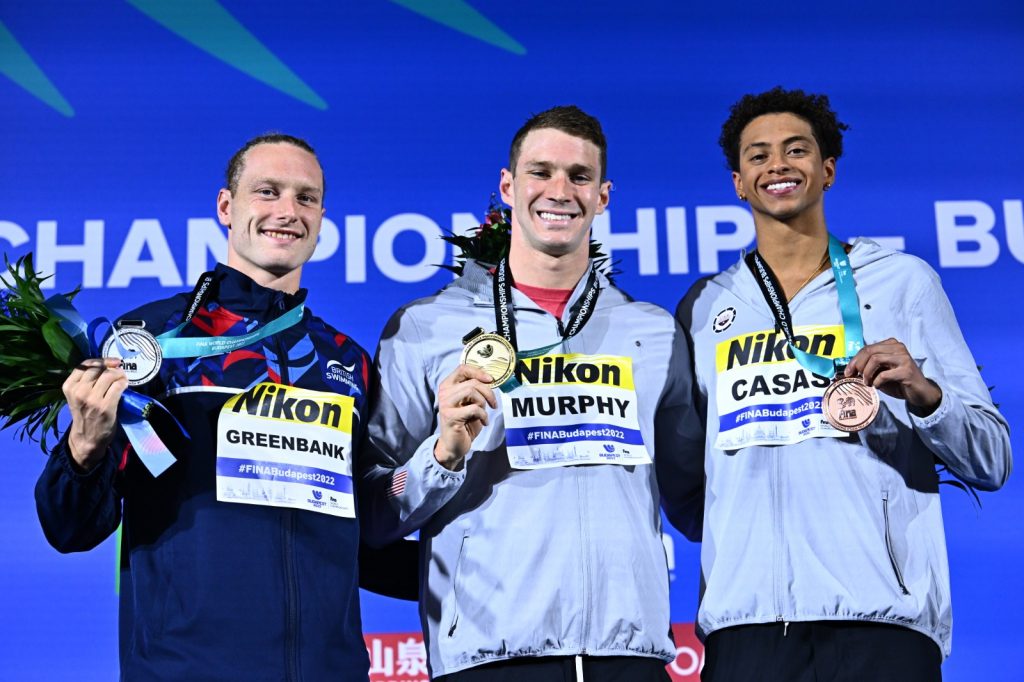 USA’s Ryan Murphy has already collected a number of accolades in his illustrious swimming career – two Olympic gold medals individually from Rio 2016, a world record, and a place on Michael Phelps’ last gold medal relay ever.

Murphy though had never won an individual World Championship title; that changed Thursday with a gold in the 200 backstroke, winning in a dominating fashion at 1:54.52. It is off his overall best time, but it is a special win for him, as he picks up his fifth career gold medal at the World Championships.

It was an extra special race for Murphy, as his parents, grandparents, and fiance were all in attendance in Budapest, something that they were not allowed to do last year during the Olympics.

Murphy, who trains with coach Dave Durden at the University of California, Berkeley, has served as captain of the USA team during this trip, just a few days before his 27th birthday.

Great Britain’s Luke Greenbank finished with the silver medal after two straight bronzes at the 2019 Worlds and 2020 Olympics. Greenbank’s time of 1:55.16 is not a personal best either but gives him his first individual silver.

The United States was able to celebrate two on the medal stand with rookie Shaine Casas in the bronze medal spot at 1:55.35. It was a new best time for Casas, and adds to his growing collection of medals – he won gold and silver individually at the World Short Course Championships in December.

Australia’s Zac Stubblety-Cook finished the ultimate trifecta for a swimmer – adding a World Championship gold medal to Olympic gold and a world record. Stubblety-Cook won the gold medal in Budapest on Thursday night with a 2:07.07 in the 200 breaststroke, which was off his 2:05.95 world record from the Australian Trials in May, but enough to officially crown him as the best man in the world for the second straight year.

Stubblety-Cook didn’t change much about his preparation with the world record success earlier this year, but it still hadn’t quite sunk in that he is the fastest man ever in the event.

Stubblety-Cook played to his strengths during the race, as he has mastered the art of the fourth 50, running down anyone in his path. At the 100 wall, he turned eighth, but wasn’t more than a second behind the leader. On the third 50, he split a 32.61 to move five spots up to third, and unleashed a 31.98 on the last 50 to win by well over a second.

The back end speed comes from the distance-based training program he swims in with coach Vince Raleigh at Chandler alongside 400 freestyle Olympic medalist Jack McLoughlin.
Only one other swimmer – Japan’s Yu Hanaguruma split under 33 seconds on the last 50 at 32.95, as he finished with the silver at 2:08.38, in a tie with Sweden’s Erik Persson (2:08.38).

This is Japan’s ninth medal in the men’s 200 breaststroke since the turn of the century, which is four more than any other country in that timespan. It is Hanaguruma’s first international medal at age 22, joining of the countrymen before him – Kosuke Kitajima, Genki Imamura, Yasuhiro Koseki and Ippei Watanabe.

Persson won Sweden’s second swimming medal of the championships after Sjostrom’s silver earlier in the 100 freestyle. Persson is also the first Swedish man to win a Worlds swimming medal since Stefan Nystrand in 2007.

The United States found its redemption in the men’s 4×200 free relay on Thursday night in Budapest with a gold medal and dominating performance at 7:00.24. The team of Drew Kibler (1:45.54), Carson Foster (1:45.04), Trenton Julian (1:45.31) and Kieran Smith (1:44.35) avenged its fourth place finish from last year’s Olympics, where the United States missed the podium for the first time in an Olympic swimming race.

Both Smith and Kibler returned from last year’s team to win this year’s gold medal, where they swam the opening legs. This year, Smith had expressed interest to his coach Anthony Nesty at the possibility of going last in a relay, which he hadn’t had the opportunity of yet, and he delivered with the second fastest split in the entire field. 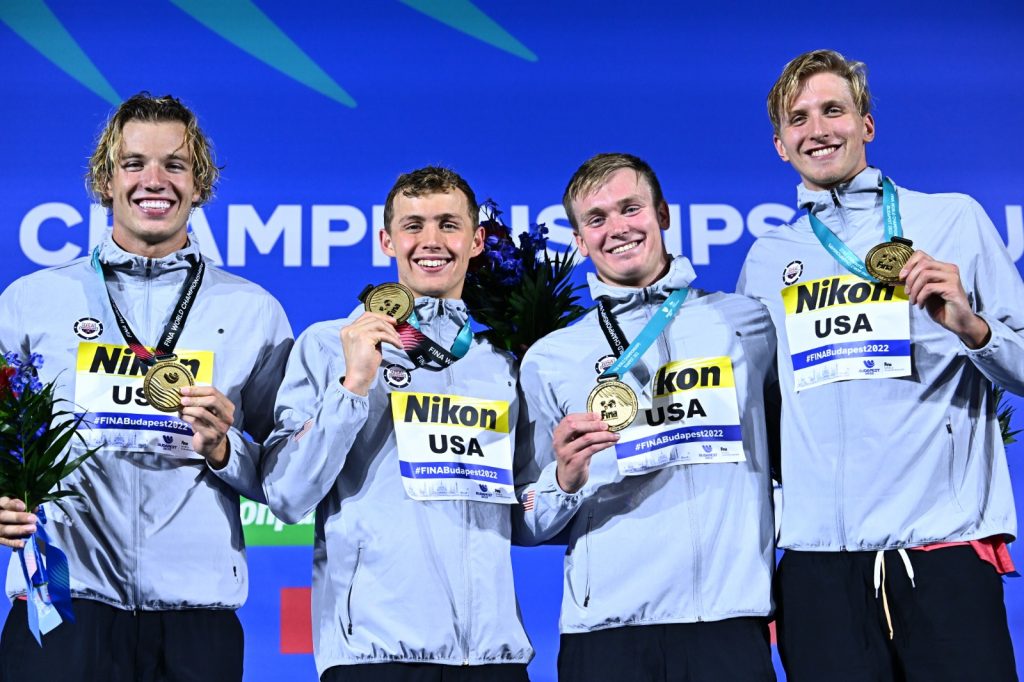 Foster and Julian, both rookies on the team, expressed their pride in representing their country on an international relay.

The United States was in a fight early on with the teams from Australia, Brazil, and Korea at the halfway point, but showed its depth in getting all four of its swimmers under 1:46 across the splits.

The USA has won four of the five relay events at the 2022 FINA World Championships, with a bronze medal in the women’s 4x100m freestyle relay as the exception.