Montenegro made sure of what would be second place in the group with a comfortable finish to group play by defeating Brazil 20-5. It was 4-0 at the quarter and that set the tone for the match, going to 5-0 before Brazil made the sheet, then settled in for a 9-1 lead before VAR decision was needed to give Gustavo Coutinho a goal for 9-2. Montenegro turned at 10-2, pushed out to 17-2 at the final break and 19-2. Then Brazil fired in three goals before the final whistle. Montenegro lost to Hungary by four goals and beat Georgia by one to secure second spot. Brazil goes to the round 13-16 classifications in Szeged looking for its first win in Hungary.

Dejan Lazovic was the undoubted star with 11 saves from 16 shots in the Montenegrin goal. He deservedly named player-of the match.

Being 5-0 up at the start was just the sort of filip Montenegro needed as its eyes what could be a good second week now that it has three matches together.

Montenegro was in a different class. Brazil is not the team it once was, rebuilding ahead of Paris 2024 qualifications.

What a glorious match this was! There were 32 fantastic goals scored by two class teams playing at the height of their powers. The goals came thick and fast and especially off the hand in lightning fashion on many occasions. Georgia was the underdog, on paper, but the Georgians did not have that mentality. Spearing goals at every chance and had the 3-1 advantage midway through the first period. Hungary dug in and levelled at three by the quarter break, equalised again at four and then allowed Georgia to level at five. Hungary pulled away for a 10-6 halftime advantage. Georgia was not out of it, pulling the margin back to two at 11-9 and 12-10. Hungary went to 14-10 and Georgia narrowed to three by the final break. Three quick goals from  Hungary pushed the difference to six, but even then Georgia was unremitting, scoring three of the last four goals to go down by an heroic four goals.

Krisztian Mancherz (HUN) was just one of many stars and collected the main award. He and Gergo Zalanky — he of the mega throwing arm — notched four goals apiece while Marton Vamos delighted with his three. On the other side of the ledger, Nika Shushiashvili and Boris Vapenski drilled three each. Best of the goalkeepers was Georgia’s Irakii Razmadze, who dragged down 11 balls. Other heroes? Both teams. They all played magnificently. 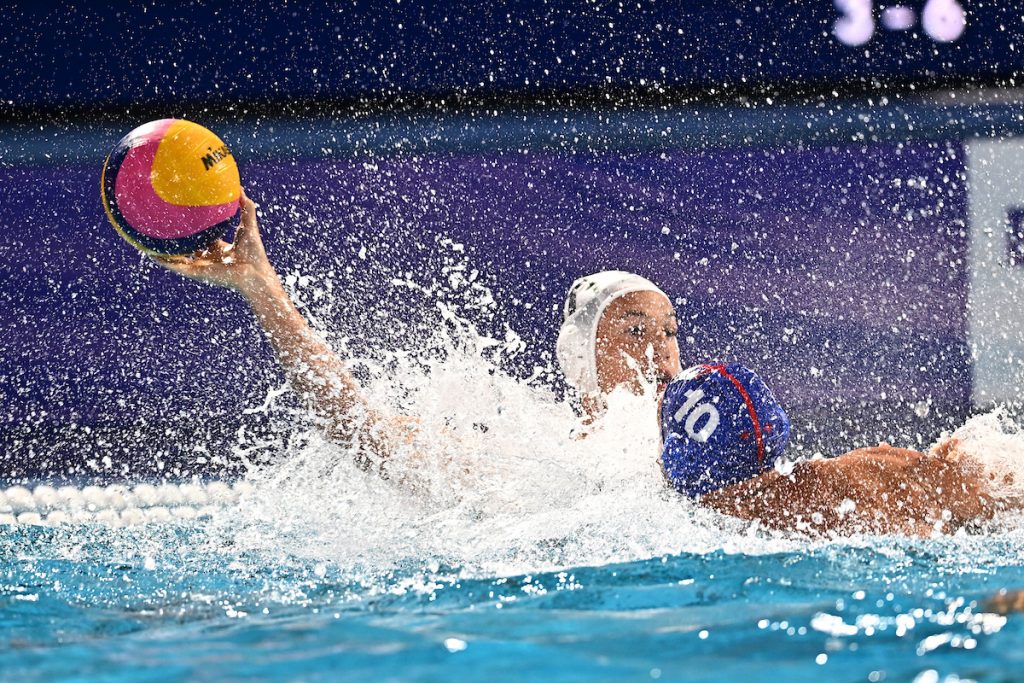 From 5-5 to 7-5 and the soon after 7-6 to 10-6 by halftime. The first three goals of the fourth period sealed the match and the group.
Stats don’t lie
Hungary went nine from 16 on extra-man attack and Georgia six from 14. That’s a lot of conversions — testament to both teams’ attractive and dynamic attacks.
Bottom line
Hungary has the team to go all the way and anyone facing Georgia in the coming week better be scared.
Final Points: Hungary 6, Montenegro 4, Georgia 2, Brazil 0.

All of the excitement of Sopron remained for the last day. The four-times world champion Italy against the two-times world champion Spain, which was the rematch of the 2019 FINA World Championships men’s water polo final, as well. It was a full house in the Lover Swimming Pool and world class players in the water. We could not wish more.

Spain started very well, as it was in shape, because La Furia Roja played its third match in six days, while Italy could not play in the second day of the preliminary rounds, because of the Covid issues of Canada. It was a real roller-coaster with loads of ups and downs for both teams. Spain was leading by 4-1, then in the second quarter Italy came back, and was in a four-goal advantage, but in the end, David Martín’s side was the happier, as Spain won 14-12 and took revenge for 2019.

Hero of the match
Goalkeeper Unai Aguirre, who was named the player of the match, made four important saves in the fourth quarter and did not concede any goal during the whole match. His saving efficiency was 59 per cent — 10 from 17 attempts. Absolutely deserved.

Turning point
There were three turning points in the match. The first has come at 5-2 for Spain, when Italy scored three in a row to equalise. After that another twist came, which shocked Spain, as Il Settebello took the lead 10-6. At this point of the match, Spain could not allow any more errors, and it did not. In the fourth quarter, when the scoreboard favoured Italy 12-10, Spain scored four goals in a row and, thanks to its excellent defence, it won the most important match of the group and finished top.

Both teams were sharp during the whole match. Just a few mistakes happened and what statistics don’t show is the momentum. Spain took it in the fourth quarter. Its keeper saved four hard shots and the players were really efficient in attack, scoring four goals. Throughout the match they attempted 31 and scored 14, which is 45 percent efficiency.

Rustam Ukumanov’s team faced the biggest test in the group stage in the final match. Kazakhstan had nothing but to learn, get some experience and be better for the rankings. Serbia dominated the group and came here with two wins under its belt and the fans witnessed what those humble Serbian guys can do when they have no pressure on them. Easy four goals in the first quarter with almost perfect statistics, then scored eight in the second when at least Kazakhstan could score one. The third was the same demolition as the first and in the last, another five goals was enough to reach the 20-goal mark.

Srdjan Vuksanovich scored a hat-trick for Kazakhstan and he was the only one from his team. On the other side, Strahinja Rasovic was the best, scoring six from seven shots.

Serbia was rock solid and relaxed, so its could easily build the lead from the first quarter.

The group winner was 61 per cent accurate from all the shots, 70 per cent from extra-man situations, 75 per cent from penalty shots and 80 per cent goalkeeping efficiency.

Both teams came here knowing the winner would finish in second place in the group. Big rivals against each other so everybody could feel the tension in the pool. USA started a little bit better, scoring four in the first and just let in two, but in the second quarter Australia could catch up and equalise. Nearing halftime, USA scored four unanswered goals. With four goals in hand, USA could play in its own rhythm and slowly build a bigger and bigger lead. The Aussie Sharks played with a huge heart and tried to stay in the game, but couldn’t reach their opponent again.

Once again, captain Ben Hallock and Maxwell Irving were the two leaders for USA, scoring half of its goals. On the other side, Luke Pavillard had the most shots (2), but only scored two goals.

After the first quarter, Australia could come from behind, but with too much enthusiasm and rushing in attack, the Sharks made some errors that led to the four unanswered goals.

USA was almost perfect in extra-man situations, missing just one from eight opportunities; three from three from the five-metre spot and Drew Holland did an excellent job between the posts with a 57 per cent save percentage. Australia had really low shooting efficiency with only 24 per cent and scoring just six goals from 11 occasions from the field.

Australia did a great job against two amazing teams and still has a chance to get through the elimination, while the USA showed great character again, and most likely it will beat South Africa and face Greece in the coming days.

Two motivated teams met in the second last match in Group B in Debrecen. Japan planned to grab its second victory and earn the second place in the quartet. On the other hand, the Croatians knew that they had to beat the opponent with 12 goals in order to overtake the Greeks. Ivica Tucak’s players scored the first two, but Japan responded in a couple of minutes. Although the first quarter ended up with a 4-3 Croatian lead, the second quarter was all about Japan. The Asians pulled out their special play that didn’t taste good for the opponent. They scored six goals in eight minutes and turned the match. The halftime break arrived and seemed to recharge Croatia. It jumped back with passion and on the scoreboard, too — 7-2 and then another 7-2 period, while Japan tired and lost concentration.

Japan’s Yusuke Inaba, with his five goals was absolutely notable, just like Ivan Krapic on the other side, scoring his five from five attempts. Croatian goalie Toni Popadic arrived at halftime and, with 56 per cent efficiency, it was a good decision to inject him into the match.

Croatia‘s third-quarter performance, achieving seven goals and letting in just two. Croatia turned and won the match in that period.

Both teams’ extra-player efficiency, 50 per cent for Japan and 58 per cent for Croatia, were also not that bad.

Croatia showed that it has a lot of potential. Japan is a hard opponent and is increasingly a significant member of the world of water polo.

The recipe was easy. If Greece wins, it grabs the first place in Group B, which counts automatically as quarter-final qualifying. Greece had the chance to achieve it, because Germany was without points after two matches. The Olympic silver medallist wanted to skip the extra match for the top eight and started the match with power and faith. The Greeks had a massive start, led by Konstantinos Genidounias, and continued their form in the second eight minutes, too. The score was 9-2 at halftime and nothing changed in the third period. For the last quarter, Greece took back the pace, while the Germans’ play improved. But still not for a tighter match at all. The final result was 16-8 for the Greeks, earning the quarter-final qualification.

Genidounias. With five goals from five attempts, earning the player-of-the-match award. Among the Germans, Zoran Bozic was the most efficient player with two from two.

Hard to find as the entire match was ruled by Greece. However, Germany showed its character in the last quarter, reducing the difference between the two teams.

Greek goalie Emmanouil Zerdevas saved with 75 per cent efficiency in the first half, which was a key for the victory. He let only two goals past in 16 minutes.

Greece wants to continue the medal collecting after the Olympic silver; we saw some of their skills in the group matches. Germany is a young and talented team, but it has to strengthen its mind for the future, not just physically.