Death, Taxes, and Sarah Sjostrom. The 28-year-old Swede won the fourth straight World title in the 50 butterfly on Friday night in Budapest with a 24.95, getting under 25 seconds for the 13th time in her career. The impressive part? No other woman has been faster than 25.07.

It is her fourth World title, dating back to 2015, and the fifth overall for Sweden, as Therese Alshammar won in 2007. The Swedes have a rich history in this event, with Anna-Karin Kammerling winning a silver and two bronzes in the first three editions of this event in the early 2000s.

It’s Sjostrom’s second medal of the championships, after a silver in the 100 free, as she advanced to tomorrow’s 50 free final as the second seed. Sjostrom will also likely swim Sweden’s anchor leg on the medley relay tomorrow.

France picked up its seventh medal of the championships with a silver from Melanie Henique (25.31). Henique last won the bronze medal in 2011 as she is the first woman to leave more than 10 years between her first and last medal in this event at the FINA World Championships.

China’s Zhang Yufei picked up her third bronze medal at 25.32, which is a new Chinese record as she won the bronze medal in each butterfly event here in Budapest.

Zhang is the second swimmer to win a medal in all three butterfly events at a single world aquatics championships, after Hungary’s László Cseh in 2015. 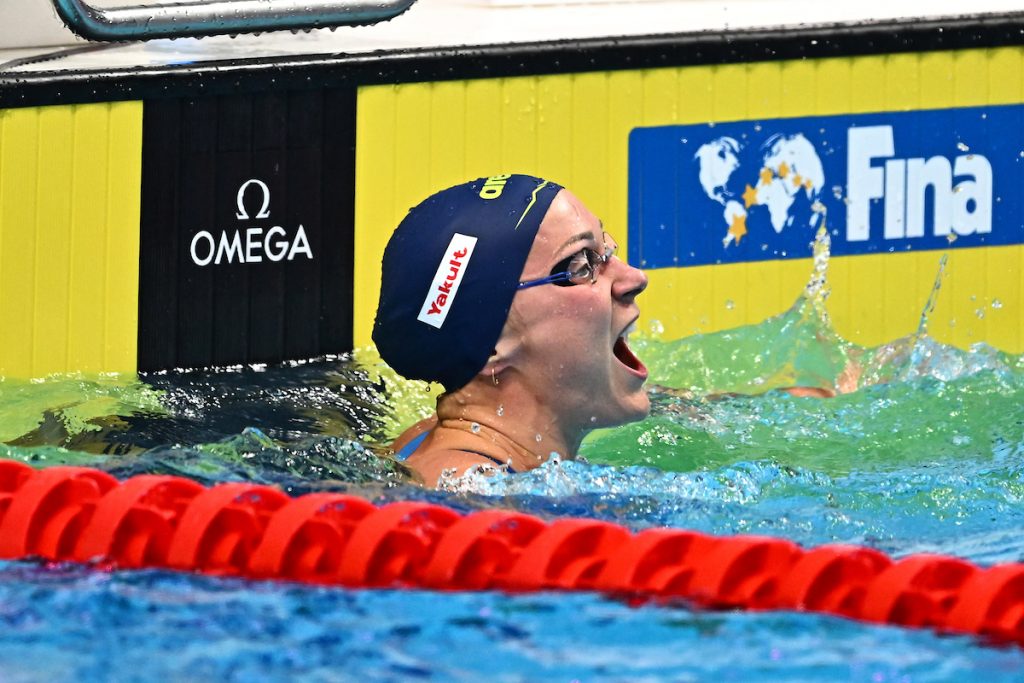 Great Britain’s Ben Proud found himself on top of the world again on Friday night in Budapest after missing the podium at the last Olympics and the last World Championships. Proud won the 50 freestyle final at 21.32 to stand on top of the podium after finishing fifth at last year’s Olympics.

At age 27, Proud is the second-oldest winner of this event at the world aquatics championships, after Alexander Popov won in Barcelona at age 31 in 2003. The race notably was without American Caeleb Dressel, who won the last two World titles and last year’s Olympic gold.

The silver went to American Michael Andrew, who upgrades his fourth place from Tokyo last year, and also gives him his third medal of the week.

Andrew already claimed bronze in the 50m butterfly and 50m breaststroke in Budapest. He is the first swimmer, male or female, to win individual medals in three different strokes at a single world aquatics championships.

The bronze went to France’s Maxime Grousset, who won the country’s eighth medal in Budapest with a 21.57. 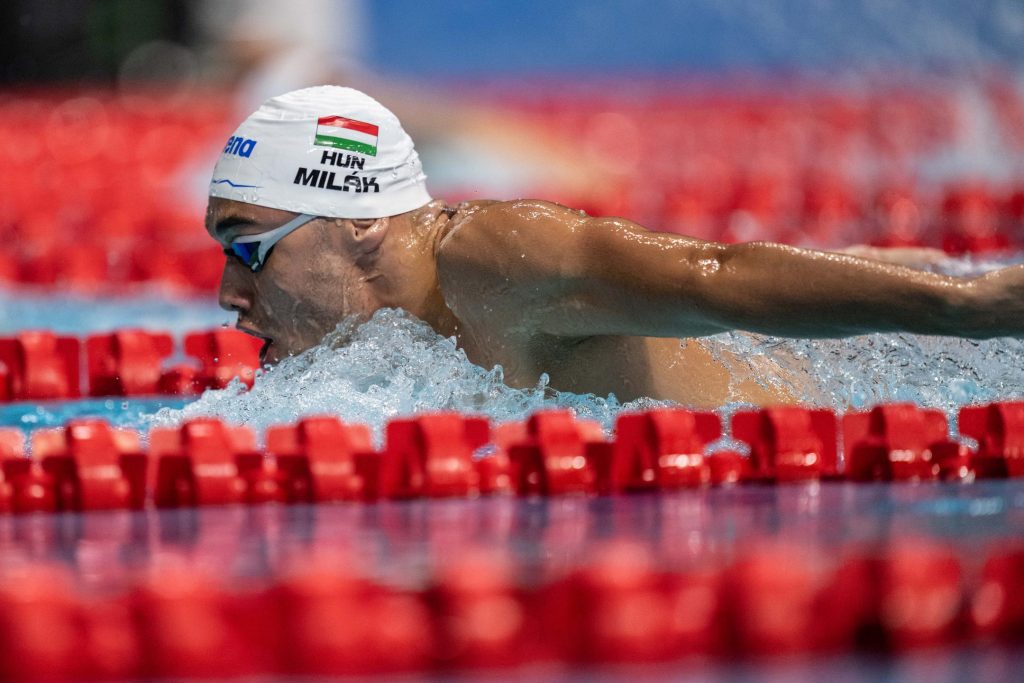 The Duna Arena in Budapest was again sold out to see Hungary’s favorite swimmer at the moment, Kristóf Milák swim another butterfly final. After his world record in the 200 on Tuesday nearly reached a decibel maximum, he followed it up with a gold medal in the 100 – a 50.14. It wasn’t a best time for Milak, as the time tied his swim from last night’s semis, but it gave the Budapest crowd something to cheer about as they also got to sing their national anthem.

His swim wasn’t as dominant as the one in the 200, with Japan’s Naoki Mizunuma winning the silver at 50.94. He had been quicker in the semifinals, but it is his first major international medal.

Mizunuma is the first Japanese swimmer to claim a medal in this event at the world aquatics championships.

The bronze went to Canada’s Josh Liendo, who added to his bronze from the 100 freestyle on Tuesday night. He swam a 50.97 not long after he missed the podium in the 50 free where he was fifth. USA’s Michael Andrew had also completed the 50 free/100 fly double as he finished fourth here in 51.11.

Canada currently has nine medals through seven days at the World Championships in swimming, a high for the nation.

Liendo picks up Canada’s second medal in a men’s butterfly event at the world aquatics championships, after gold by Bruce Robertson in the men’s 100m butterfly in 1973.

Australia’s Kaylee McKeown followed up her Olympic gold medal from last year with a gold here at the World Championships in Budapest with a 2:05.08.

It was McKeown’s second individual medal of the week after a silver in the 200 IM on Sunday.

McKeown, who trains with Michael Bohl at Griffith University, is the second Australian woman to win this event at the FINA World Championships. She follows in the footsteps of Emily Seebohm (2015-2017). Australia now has six gold medals in swimming at the championships, as McKeown’s victory was similar to those last 50 comebacks from Zac Stubblety-Cook and Mollie O’Callaghan this week.

The gap between McKeown and Phoebe Bacon (USA, silver) was only 0.04 seconds. This marks the second-smallest difference between the gold and silver medallist in this event at the Worlds after Cornelia Sirch (GDR) beat Besty Mitchell (USA) by 0.02 seconds in 1986.

This was Bacon’s one and only event in Budapest as she described the feelings of waiting until day six to swim her first race.

USA’s Rhyan White won the bronze at 2:06.96 to improve on her fourth place from Tokyo, adding on to her world short course gold in December.

The word “greatest” gets used in sports frequently but American Katie Ledecky has a serious resume to be considered the greatest female swimmer in history. Ledecky became the third swimmer to win an individual event at a World Championships five times, and the first to do it consecutively when she won the 800 freestyle in Budapest on Friday night.

Ledecky now has 29 of the 30 fastest 800 freestyles in history – a staggering number that almost doesn’t even seem real.

The swim is Melverton’s first individual medal internationally, as she won a silver earlier this week in the 4×200 free relay. It was also a new best time for Melverton, putting herself in a tie for 22nd all-time. Melverton had taken the race out hard, flipping at the 400 at 4:06.46, which was only three seconds on her 400 flat start best. She was three seconds ahead of Quadarella at the halfway point, with the Italian eventually overtaking Melverton at the 700.

But Melverton found another gear on the last 100 to win Australia’s second of three medals on the night.

For the fourth straight World Championships, the world record fell in the mixed freestyle relay final, but this time it was the Australians claiming their first gold medal of the relay with a 3:19.38. The team of Jack Cartwright (48.12), Kyle Chalmers (46.98), Madison Wilson (52.25) and Mollie O’Callaghan (52.03) erased the United States’ world record of 3:19.40 from Gwangju 2019, as the U.S. had won all three gold medals in this event since it debuted in 2015.

This was Australia’s second relay gold medal of the week after the women’s 4×100 free gold on Saturday. Australia has won either gold or silver in every relay this week.
The Americans ended up with the bronze, after being chased down by Canada on the back end.