It was the can’t-miss event of the 19th FINA World Championships. The fourth night of swimming finals, featuring the men’s 200 butterfly, sold out faster than any session of swimming, and it was all for the Hungarian crowd to see their superstar – world record holder Kristof Milak.

Milak, who trains in Budapest in the Duna Arena, was met with deafening cheers as he walked out behind the blocks, with the capacity crowd in a frenzy in anticipation of the four-lap race.

And it was apparent on the dive and the breakout that nobody would match Milak’s speed and endurance, and a two-minute long party ensued for the crowd. At 50 meters, Milak turned under world record pace by nearly a half second. At the 100, his 51.89 was faster than anyone had gone before and at the 150, he was over a second under his own world record pace.

A sub-1:50 was once thought an unthinkable barrier for the 200 fly – one that American Michael Phelps had dreamed of but never achieved. On Tuesday night in Budapest, it almost became a reality. But it didn’t matter to the Hungarian crowd, who were ecstatic to see Milak win. It wasn’t a sub-1:50 but it was faster than any man had gone before. Milak’s 1:50.34 erased his 1:50.73 from Gwangju 2019 and gives him seven of the ten fastest times in the history of the event.

Milak, who trains with coach Balázs Nagy, is the third swimmer to set an individual world record at a world aquatics championships in front of a home crowd, after Federica Pellegrini in Roma in 2009 and Sun Yang in Shanghai in 2011. 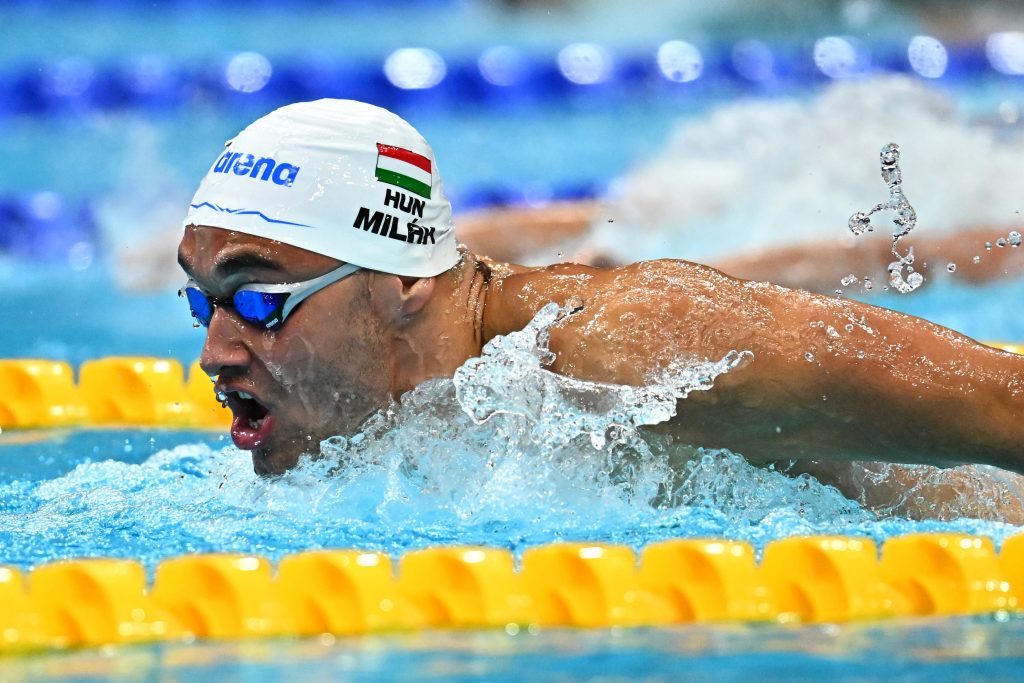 Milak believes there is more to give, admitting the swim wasn’t well paced. The crowd drove him to the fast time, something that he wanted. In between the heats and finals sessions today, he asked the Hungarian announcer to push the crowd over the last 60 meters when the pain was going to be settling in.

Elsewhere in the final, France’s Leon Marchand won his second medal of the meet with a silver at 1:53.37, which is a new French record and puts him eighth all-time. It was his first of two swims tonight, as he also swam to the top seed for tomorrow’s 200 IM final.

Japan’s Tomoru Honda added to his Olympic silver last year with a bronze in Budapest at 1:53.61. 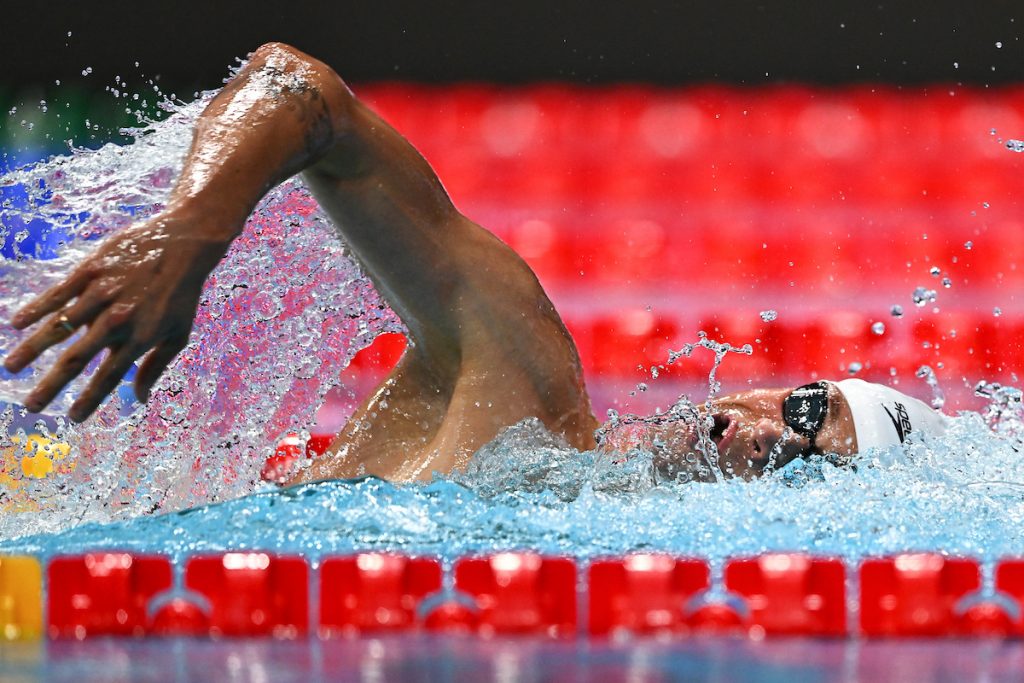 In what felt like a deja vu performance from the 800 freestyle final a year ago at the Olympics, American Bobby Finke won his first ever World title with a 25.93 on the final 50, winning with a 7:39.36. The time is a new American record as he moves up to seventh all-time and was reminiscent of his swim from last year, as he turned fourth at the 750 before moving by everybody in stunning fashion.

Finke, who trains with coach Anthony Nesty at the University of Florida, had been hanging around in third and fourth place for the majority of the race, staying in the pack that was led by the Ukraine’s Mykhailo Romanchuk, alongside Germany’s Florian Wellbrock and Italy’s Gregorio Paltrinieri.

Romanchuk had taken control of the race at the 350 mark, sitting a body length ahead of the three guys behind him, but with a 200 to go, they started to close the gap. And on the last 50, both Finke and Wellbrock turned on the jets to pass the Ukrainian.

It has been an understandably difficult year for Romanchuk, who moved to Germany to train with his rival Wellbrock and coach Bernd Berkhahn ten days after the February invasion.

Romanchuk has been in touch with his father every day the last few months, who is fighting in the war.

China’s Yang Junxuan won the nation’s first gold medal in the swimming pool at the World Championships in Budapest with a 1:54.92 in the 200 freestyle, leading the final from the 100 mark all the way to the last stroke.

Yang, who was fifth in the last Worlds final in Gwangju and was fourth in Tokyo last year, made her first global podium at age 20, and finished 1-3 with teammate Tang Muhan, who won bronze with a 1:56.25 from lane eight.

The silver went to Australia’s Mollie O’Callaghan, who has been dubbed as a rising star in her home nation at age 18. O’Callaghan swam a 1:55.22, slower than her season best of 1:54.94, but enough for her first spot on an international podium. 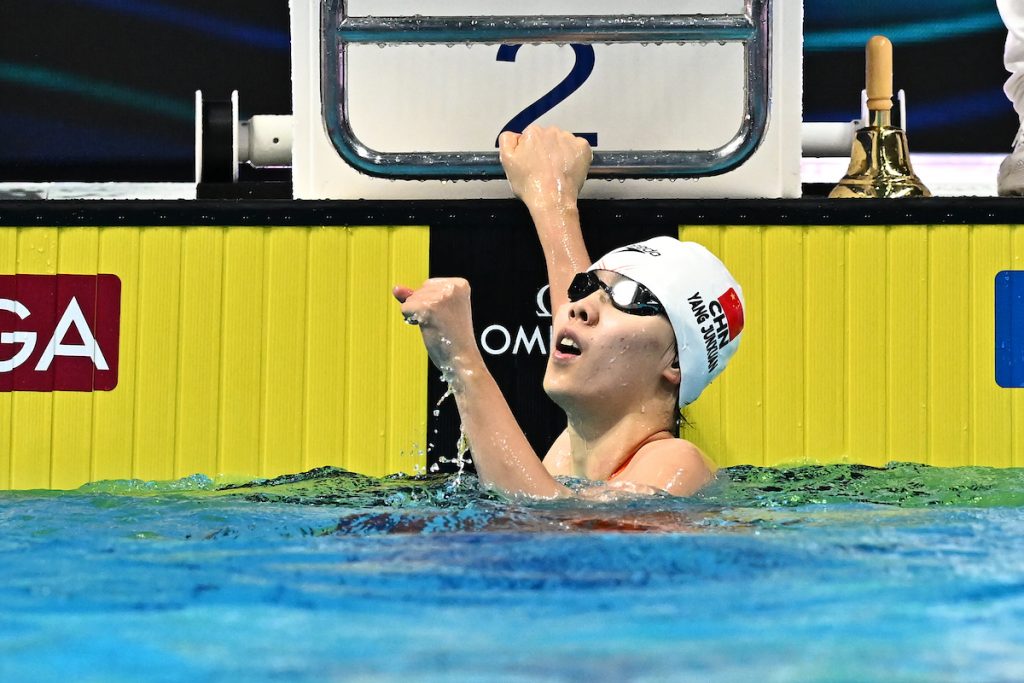 Since the inaugural 50 breaststroke final at the Worlds in 2001, the United States had never won gold in the men’s 50 breaststroke at this meet, until Tuesday night in Budapest when 28-year-old Nic Fink set a new American record with a 26.45 to win gold.

Improving on his bronze from the 100 where he led at the 50m mark, Fink moved to fifth all-time with his swim, lowering Michael Andrew’s American record that stood at 26.52 from this year.

It wasn’t the best for Martinenghi but it was his second medal of the week. 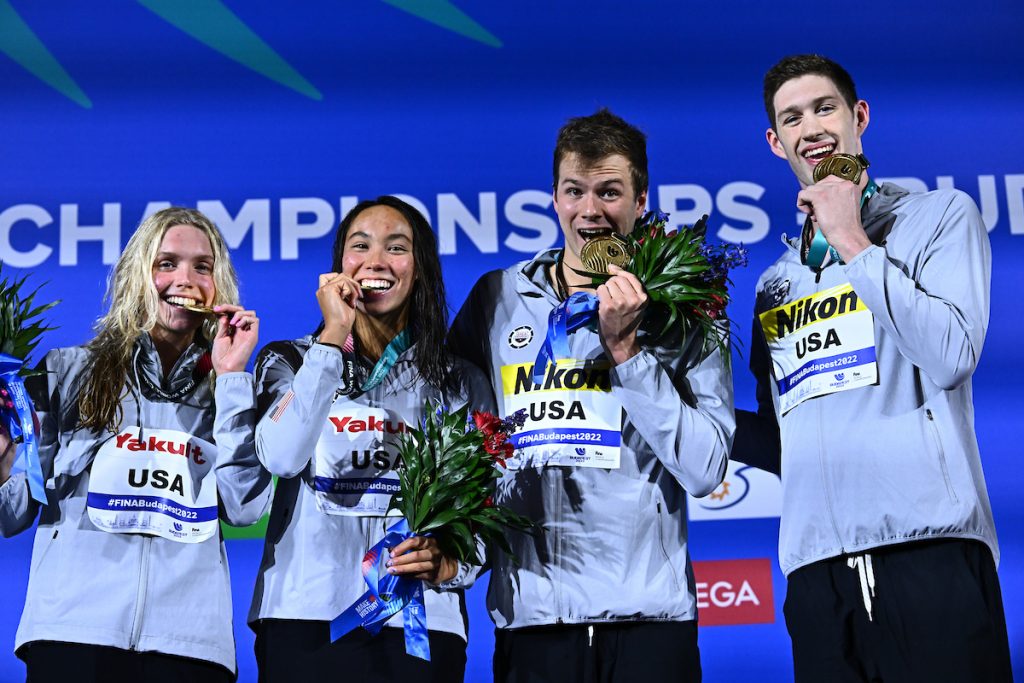 Even with the absence of Caeleb Dressel, who scratched out of his events today, the USA did not miss a beat, and with three World Championship rookies on the team, they swam away from the rest of the field with Australia in silver (3:41.34) and the Netherlands (3:41.54) in bronze.