Netherlands and France fight through to women’s quarter-finals

This was Canada’s match to lose. With a 2-1 lead at the quarter and 3-2 ahead for much of the second quarter, Canada was in the zone and Netherlands was left to ponder what to do. It didn’t take long as the Dutch levelled before halftime and then went on a devastating third-quarter blitz that left Canada swamped and struggling to get back into the match. It was a four-goal differential at the final break and then two by midway through the fourth. With the last minute looming, Canada needed to punch in a couple of goals, but failed to even have some shots that could have narrowed it to one and possibly force a shootout. With the task at hand proving too hard, Netherlands slipped in the last goal with six seconds remaining and the Dutch, the 2008 Olympic champion, will now play Greece, the winner of Group D. Canada goes to the classification round 9-12.

Match heroes
Lola Moolhuijzen opened the third-period scoring and set Netherlands on the path to victory with her two goals from deep left, the second with a superb lob on the narrowest of angles. She deservedly gained the player of the match. The rest? Well, Canada had seven scorers, as well as the Dutch with Sabrina van der Sloot the only other player to finish with two goals. Dutch goalkeeper Laura Aarts was the best in goal, claiming 11 saves while Canada smacked down nine from its two keepers.

Turning point
There is no bigger turning point than coming from a goal behind at 3-2 to lead 8-3 five minutes into the third period, give up a goal and then increase the margin to 9-4 two minutes form the final quarter. Well done, Netherlands.

Stats don’t lie
Perhaps they do. Canada managed four from 11 on extra-man attack while Netherlands struggled against Canada’s drop defence, converting just one from seven. Not converting some open counters hurt Canada and having 30 shots for just seven goals compared to Netherlands’ 33 attempts for 10 goals was the difference.

Bottom line
Netherlands wanted it more and because it was struggling on the extra-man count, it used fantastic cross passes to catch out the goalkeeper and the defence. Canada’s defence was excellent in the first quarter and its attack was slack in the second.

Hungary came through with the goods, on target and on time. Head Coach Attila Biro used his bench early and this resulted in the slow scoring until three minutes into the second quarter. Then the big guns slipped into the warm Margaret Island waters and the goals started coming in regular fashion, Dorottya Szilagyi netting three of them, two from the deep left and the third with a counter-attack lob 12 seconds from the long break.

Match heroes
Szilagyi was excellent, captain Rita Keszthelyi was her typical brilliant self and Greta Gurisatti plundered a couple and was named player of the match.

Turning points
Once again, it was the opening whistle. Hungary was too strong and will be thereabouts when the medals are handed out next weekend.

Bottom line
Now that those matches are behind them, both teams can concentrate on the next, more important matches. Argentina will be playing for 9-12 and Hungary will tackle world champion United States of America to see who progresses to the semifinals. 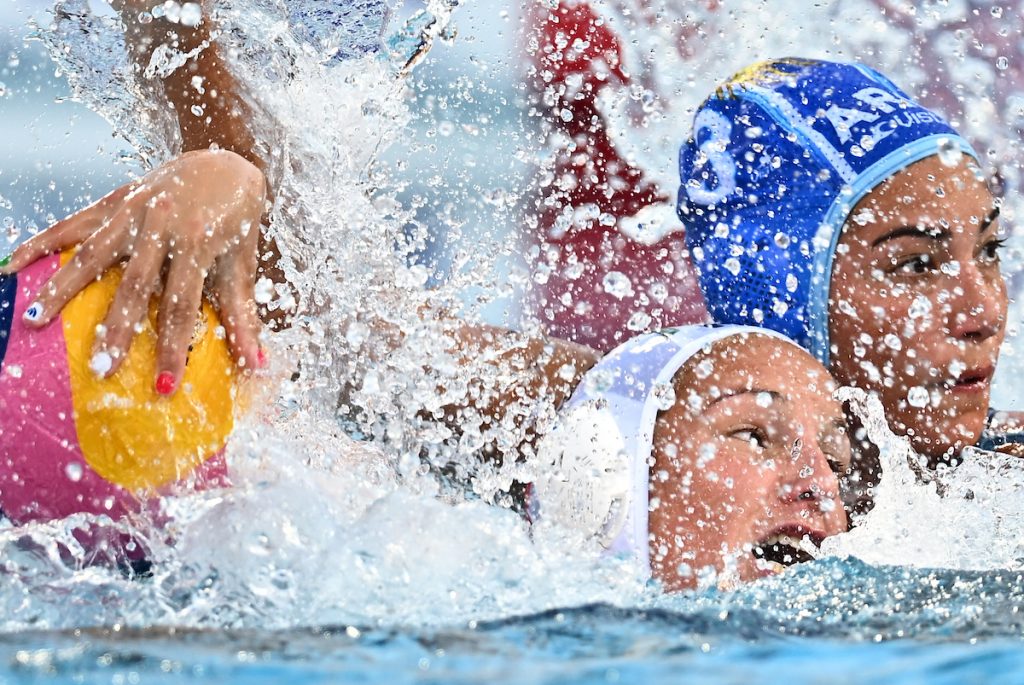 This was a match full of heroes, but there could be only one winner. The fact that it went down to a penalty shootout and only one shot missed, was testament to such a tight encounter. It was a see-saw match with New Zealand 2-1 up at the quarter and 5-4 at halftime, while it was 7-7 at the third break. France went ahead twice in the last quarter, only for the Kiwis to draw level and force the shootout. The match was tied at every number except two. Both nations led the match four times before the shootout. New Zealand’s only miss in the shootout hit the left upright. All credit to both teams, but especially France, who can now feature in the top eight of the world just two years out from hosting the Olympic Games.

Match heroes
Morgan McDowall was the undoubted star of the first three quarters with five goals that comprised all but two of her team’s total at that stage. She was the fulcrum on which New Zealand relied and it took a herculean effort for France to shadow and shut down her every stroke and movement. This allowed Juliette Dhalluin to slip into the player-of-the match reckoning with her four goals, one in the shootout. Strangely, to outsiders, McDowall was not used in the five-person shootout roster.

Turning points
New Zealand went 3-1 clear and by the start of the third, France retook the lead for 6-5 after scoring the match’s first goal. Then it switched to the Kiwis 7-6. Then France had an 8-7 advantage and 9-8 before Bernadette Doyle equalised with 17 seconds remaining to force the shootout.

Stats don’t lie
New Zealand had the better of the extra-man attack with four from eight; France had two from eight. Jessica Milicich (NZL) made eight saves and France’s Anne Collas stopped seven. Therefore New Zealand should be the better. However, when it comes to a penalty shootout, the main stat is who scores more — France.

Bottom line
Either side could have been an excellent representative in the top eight, but it happens to be France. France has the awesome task of toppling Italy should it wish to advance to the semifinals. New Zealand, five times a 12th-place finisher in recent history, now has a mighty chance to improve on that figure in the round 9-12 classifications.

Spain will play USA in the quarter-finals after overcoming Kazakhstan 14-1 with a clinical display that was never in doubt. Kazakhstan did well to keep in the fight and limit Spain’s attack on a multitude of occasions. Letting in only two goals in the second quarter was excellent, and then keeping Spain scoreless for nearly the last seven minutes was almost exceptional. However, Kazakhstan will now need to concentrate on the 9-12 semifinals on Tuesday.

Match heroes
Probably the biggest hero was Curacao referee Harvey Hinds who took a turn for the worse with 1:36 left in the match, falling from the referee walkway and landing heavily on his ankle and needed stretchering from the arena. German referee Frank Ohme stepped in for Hinds for what is a rare incident at this level. Spain’s Bea Ortiz was the playing hero with four goals.

Turning points
No such thing when Spain is 4-0 ahead at the quarter and always rolling to the Kazakh line. with menace.

Stats don’t lie
Both teams struggled on the extra-man attack with Kazakhstan managing one from five and Spain two from seven. Alexandra Zharkinbayeva pulled down 10 saves for Kazakhstan, proving her worth and keeping the score lower than expected.

Bottom line
Spain is too classy, having taken the silver medal at the last two editions and an Olympic silver in Tokyo last year, to boot. Kazakhstan, with the exception of a few evergreens, is a young team at an average age of 23 and is setting itself for the Paris Olympics qualification.