In a surprising turn of events on the last night of swimming at the World Championships, American Justin Ress was reinstated as World champion after initially drawing a disqualification for being submerged at the finish.

Ress swam a 24.12, ahead of American Hunter Armstrong who was visibly not happy when Ress’ disqualification appeared on the board. Armstrong, although the world record holder, was gracious in giving his gold medal to Ress after the medal ceremony.

Armstrong finished second at 24.14, adding to his bronze in the 100 on Monday night.

Ress, who nearly retired in December, moved across the United States to train with coach Jeff Julian in Mission Viejo.

Poland’s Ksawery Masiuk won the silver medal by virtue of his 24.49 at just 17-years-old. Masiuk was a two-time European Juniors champion last year in the 100 and 200 backstroke and wins his first senior medal before his 18th birthday in December.

After setting the 100m backstroke world record earlier here in Budapest, Italy’s Thomas Ceccon was fourth in this one in 24.51.

Don’t call it a comeback! Lithuania’s Ruta Meilutyte is once again the world champion in the 50 breaststroke, ten years after initially shocking the world at age 15 in the 100 breast at the London Olympics. Meilutyte, who had retired from swimming in 2019, added to her bronze from the 100 breast on Monday to win the 50 at 29.70.

Meilutyte, age 25, took down the 100 champ and world record holder in Italy’s Benedetta Pilato as the 17-year-old star won silver at 29.80, repeating her silver from the 2019 Worlds.

Meilutyte wins her second gold medal at the world aquatics championships, nine years after winning the women’s 100m breaststroke in 2013. Only László Cseh (HUN) left more years between two individual gold swimming medals at the FINA World Championships: 10 between 2005 and 2015.

The bronze went to South Africa’s Lara van Niekerk at 29.90. At age 19, she claims South Africa’s first 50 breaststroke medal on the women’s side at the World Championships. 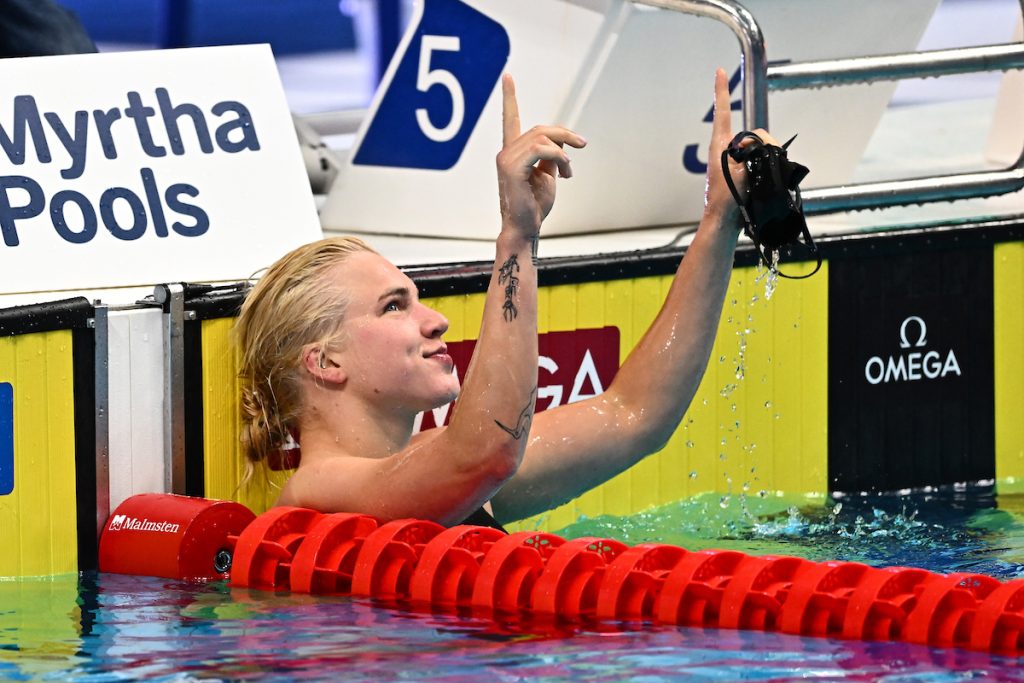 Gregorio Paltrinieri knew he needed to take it out fast if he would win the gold medal, and he stated his intentions early in the race. Paltrinieri, knowing the last lap speed of his rivals Bobby Finke and Florian Wellbrock, took the race out hard from lane 1, hoping he would have enough of a cushion to hang on on the last 50. 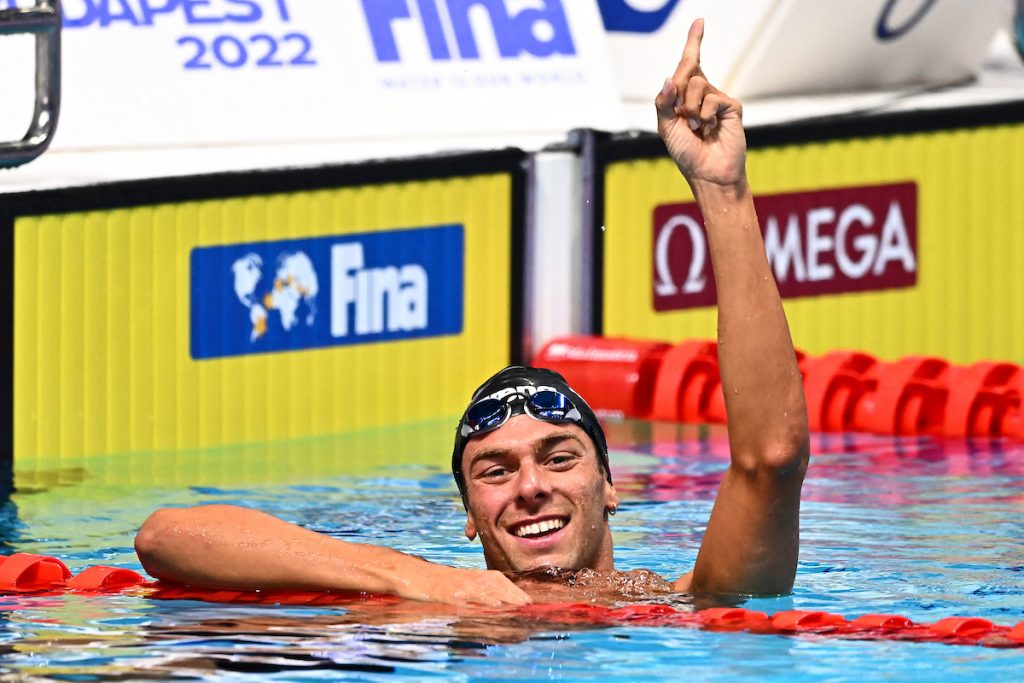 And Paltrinieri swam his own race, getting as far as three seconds under the world record pace set ten years ago by China’s Sun Yang. But Paltrinieri did not have enough in the tank to swim the fastest time in history, but his time of 14:32.80 is the second-fastest time ever recorded, unseating himself from an August 2020 swim in an empty Foro Italico in one of the first organized meets during the global pandemic.

Paltrinieri had the Duna Arena on its feet, willing him on in hopes of seeing the third world record of the meet. It wasn’t to be, but it was perhaps the loudest ovation for a non-Hungarian winner. It was also his third World title in the event, adding to his golds in 2015 and 2017. Only Grant Hackett has more titles in this event with four from 1998 – 2005.

The silver medal went to American Bobby Finke (14:36.70), whose patented last 50 of 26.10 was not enough to catch Paltrinieri out in front. He out-sprinted Germany’s Florian Wellbrock (14:36.94) who came home in 26.86. It is a new best time for Finke, who moves up to fifth all-time and breaks the American record.

Germany’s Lukas Martens (14:40.89) and the Ukraine’s Mykhailo Romanchuk (14:40.98), who both train with Wellbrock in Magdeburg, finished in fourth and fifth in one of the fastest fields ever assembled.

Sweden’s Sarah Sjostrom won her second gold medal of the week in the Hungarian capital, racing to a 23.98 in the 50 free final, the 40th swim faster than 24 seconds. Sjostrom adds to her gold in the 50 fly last night, and her silver in the 100 free the night before. It is also her second 50 free title in addition to the one-lap gold she won at this same facility in 2017.

Of her 20 medals at the FINA World Championships, 19 were won in individual events. Only Michael Phelps (USA, 20) collected more individual swimming medals at Worlds.

Wasick is the second female swimmer representing Poland to claim a medal at the FINA World Championships, after Otylia Jedrzejczak (G2-S3-B2).

For the second time, four medals are awarded in this event at the world aquatics championships, after 2009: Britta Steffen (gold), Therese Alshammar (silver), Marleen Veldhuis (bronze) and Cate Campbell (bronze).

Canada may have found its next swimming superstar – 15-year-old Summer McIntosh won her second world title on Saturday night in Budapest with a 4:32.04 and a new world junior record.

It was McIntosh’s second gold of the week after a win in the 200 butterfly, while it was Grimes’ second silver after getting runner-up in the 1500.

McIntosh has been a rising star in the sport of swimming since swimming in the 400 free Olympic final last year as a 14-year-old. Now two months away from her 16th birthday, McIntosh has three individual medals at the World Championships, including a silver in the 400 freestyle.

McIntosh, who trains with coach Ryan Mallette, was out under world-record pace at the 200 mark at 2:07.97, with Grimes in tow at 2:09.30. The two teenagers had built such a big lead on the rest of the field that included the last two Olympic champions.

Grimes and McIntosh were both born in 2006, as McIntosh is the youngest winner of the women’s 400 IM since 15-year-old Tracy Caulkins won in 1978. McIntosh is also the first Canadian swimmer to claim four medals at a single Worlds.

The bronze medal went to Emma Weyant (4:36.00) of the United States, who turned sixth at the 200, some six seconds off the leaders. But Weyant played to her strengths on breaststroke and freestyle, and out-raced the last two Olympic champions – Hungary’s Katinka Hosszu was fourth (4:37.89) and Japan’s Yui Ohashi (4:37.99) was fifth.

This was Weyant’s lone event of the meet, waiting around all week to get up and race.

The Italians had been building toward the men’s medley relay all week. With gold medals from breaststroker Nicolo Martinenghi on Sunday, and a world record from backstroker Thomas Ceccon on Monday, the Italians looked to be the team to potentially take down the Americans, who set the world record in Tokyo last year.

The Italians’ strength on the front half was established at the 200 mark, with Burdisso diving in under world record pace nearly a full second ahead of USA’s Michael Andrew, who closed the gap at the 300 exchange. Ryan Held could not quite get over the top of Miressi, and the Italians celebrated their first gold medal in a relay at the World Championships. Italy upgraded its bronze from Tokyo last year, as the team had never actually won a medley relay medal on the men’s side at Worlds.

The Americans finished with the silver for the second straight Worlds, as Great Britain, the defending champs and Olympic silver medalists, won the bronze at 3:31.31 despite missing two of its legs from last year’s team.

United States finished on 45 medals in swimming at the 2022 FINA World Championships, breaking the record for most in the sport at a single edition: previously 38 by USA in 2017.

The American women won their third straight gold medal in the medley relay, holding off a late charge from the Australian team. The United States claimed its fourth gold medal in the last five championships in this event, as the team of Regan Smith (58.40), Lilly King (1:05.89), Torri Huske (56.67) and Claire Curzan (52.82) swam a 3:53.78 to close out the Budapest World Championships with its 45th swimming medal of the meet.

The gold also marked Huske’s sixth medal of the championships on her 16th swim.

The result is a flip from last year’s Olympics, where the Australians out-fought the Americans in Japan. These two nations have long dominated the women’s swimming relays, as they both have stood on the podium of this event at the last six World Championships.