Men’s 200 Freestyle – David Popovici Answers the Hype With Other Worldly 1:43.21
Swimming might have just found its next superstar. At 17, David Popovici of Romania threw down a 1:43.21 in the final of the 200 freestyle to win his first ever international medal at the World Championships in Budapest.

Popovici, who burst onto the scene last year as a 16-year-old when he swam a 47.30 at the European Juniors, followed that up with the fastest 200 freestyle anyone has swum in 10 years. His time puts him fourth all-time, behind Paul Biedermann, Michael Phelps, and Yannick Agnel.

Popovici, who trains with coach Adrian Radulescu had shown a lot of speed in the first two rounds, and in the final when he turned at 49.96, he didn’t look like he had overexerted himself. In fact, he was hoping to be out a little slower than sub-50.

Popovici’s teenage success has been compared to that of Ian Thorpe, who was an Olympic champion and world record holder before his 18th birthday some two decades ago.

The race was notably without last year’s silver medalist in Great Britain’s Duncan Scott, who contracted COVID right before the meet, but the two will meet in mid-August in Rome at the European Championships.

Korea’s Hwang Sunwoo, who is another future star in the sport at just 19-years-old currently, won his first international long course medal with a silver at 1:44.47, while Dean backed up his surprising Olympic gold medal with a 1:44.98. 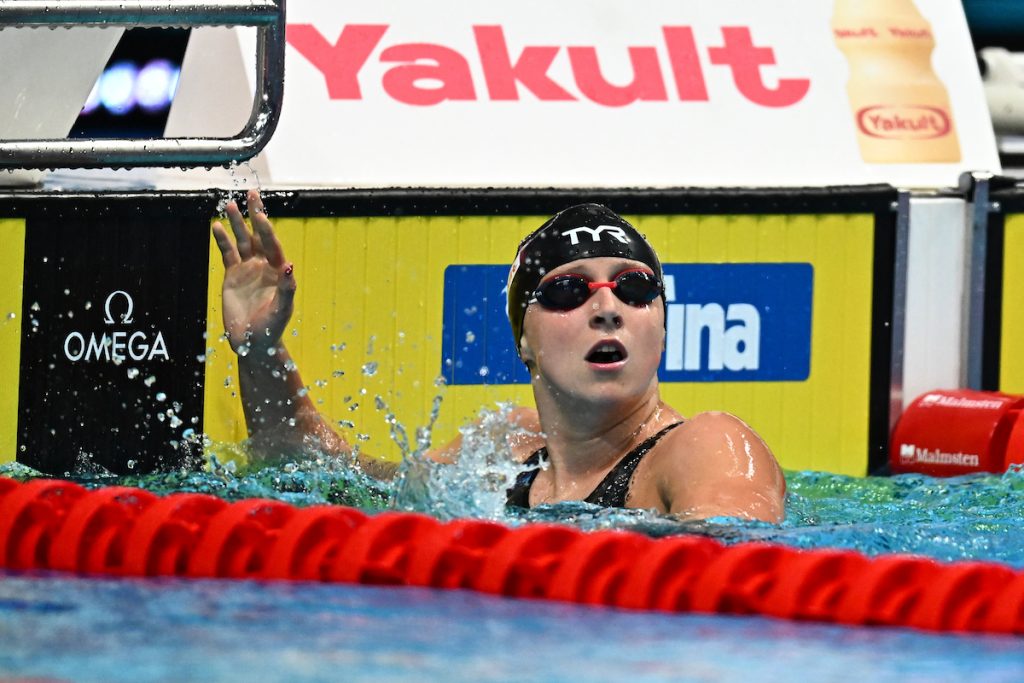 For the fourth time, Katie Ledecky of the United States was the world champion in the 1500 freestyle, winning Monday night in Budapest with a 15:30.15. Ledecky was under her world record pace through 500 meters but couldn’t hold on to it as the race progressed, but she was far enough in front of the rest of the world. Ledecky wins her second gold of the meet after the 400 on Saturday night, giving coach Anthony Nesty his third gold in three days after Caeleb Dressel’s 50 fly win last night.

Fellow American Katie Grimes, age 16, won her first international medal with a silver at 15:44.89. It was a dejavu moment for Ledecky, who went 1-2 last year with Grimes’ former training partner Erica Sullivan at the Olympics. Grimes lowered her best time from 15:51 and now sits ninth all-time.

Grimes, 16 years and 163 days old, is the second-youngest medallist in this event at the world aquatics championships, after Katie Ledecky claimed gold at age 16 years and 135 days in 2013.

Australia’s Lani Pallister won her first international senior medal at 15:48.96 for bronze. It was in this pool in 2019 that Pallister was the world junior champion where she was named swimmer of the championships. Pallister nearly won her first medal in the 400 on Saturday, but was out-touched at the last stroke. She rebounded to lower her best time from 15:55 to 15:48 to get third.

Pallister is the first Australian medallist in this event at the world aquatics championships. The women’s 1500m freestyle was the only women’s event in which an Australian swimmer had not reached the podium at the worlds.

American Regan Smith won a tight duel with Canadian Kylie Masse in the 100 back final with a 58.22 to Masse’s 58.40. Masse had come in as the two-time defending champion, winning in 2017 and in 2019, while Smith was the top seed gunning for the world record of 57.45 set last year by Australia’s Kaylee McKeown.

McKeown had surprisingly scratched this race to focus on the 200 IM on Sunday evening, as the Aussie had won gold in Tokyo last year over Masse and Smith. Had McKeown swum the final, iit was expected it might take a world record to win, with Smith getting with 0.20 of McKeown’s record last night. But with McKeown out of the picture, Smith and Masse had a battle of their own, with Smith becoming the first World champion in the 100 back for the United States since Missy Franklin in 2013. 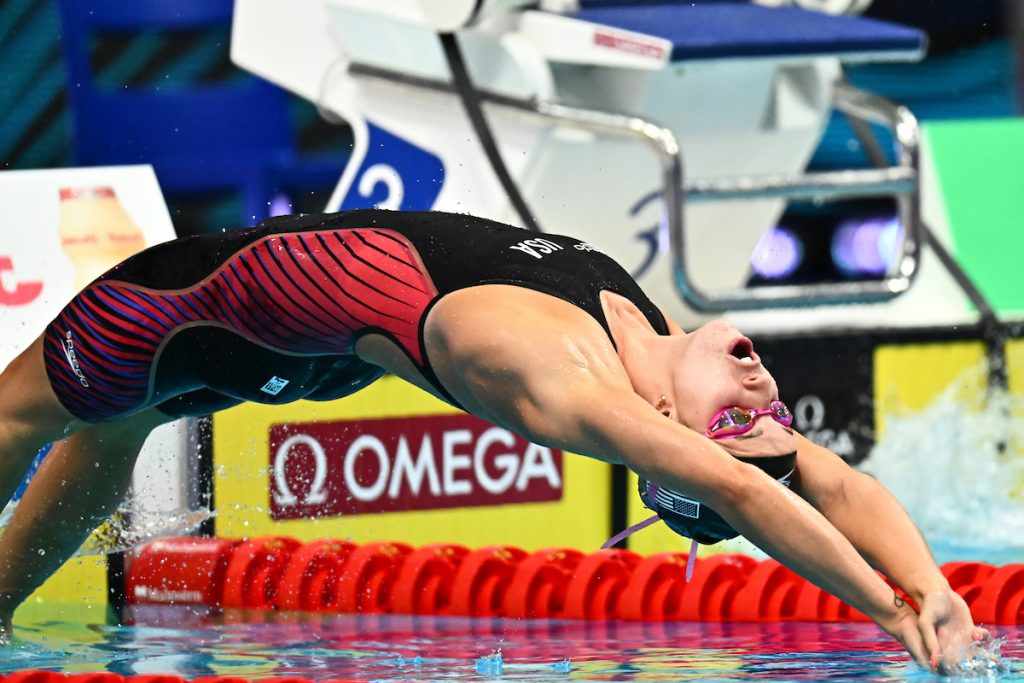 Smith gives coach Greg Meehan his second gold medal of the championships as she trains with 100 butterfly gold medalist Torri Huske. Masse wins her third straight medal, and her sixth Worlds medal overall, tying her for second all-time amongst Canadians with Penny Oleksiak as they trail Ryan Cochrane (8) in total number of medals.

The bronze went to Claire Curzan of the United States, who was the silver medalist at the World Juniors in 2019. Curzan swam a 58.67, which was not a best time, but her first at a major international meet. 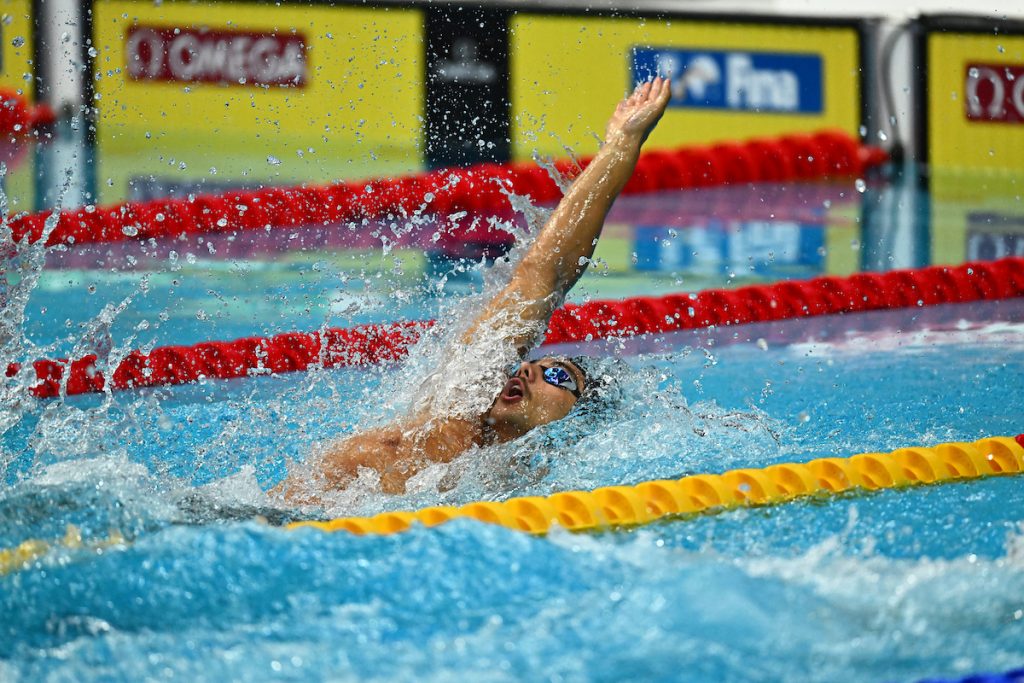 The record had stood for six years, with many taking a crack at it since the Rio Olympics, but the men’s 100 back world record had stood at 51.85 since 2016, with Ryan Murphy holding the title as the fastest man ever in the event.

But on Monday night in Budapest, Murphy’s world record was broken by Italy’s Thomas Ceccon, who swam a 51.60. Coming into the meet, Ceccon, age 21, had a 52.30 best time and swam a comfortable looking 52.12 in the semi-finals.

In the final, Murphy had taken the race out hard at the 50, flipping under his own world record pace, with Ceccon right behind. But the Italian ran him down, splitting a 26.46 on the second 50, obliterating the world record by two tenths for the first global mark of the championships.

At the finish, Ceccon touched at 51.60, with Murphy in silver at 51.97 and USA’s Hunter Armstrong in bronze at 51.98. It was Ceccon’s first major international medal individually after finishing fourth in Tokyo.

Murphy, despite relinquishing his world record, was extremely satisfied with his swim as it was the first time he was under 52 seconds in four years. Murphy and Armstrong shared the podium, as the United States continued its strong showing at the championships with 18 medals at the moment. Armstrong becomes the fifth man to break 52 seconds in the event.

Ceccon is the first Italian man to win a gold medal in a backstroke event at the world aquatics championships, and also backs up his strong junior career – he was the bronze medalist in the Youth Olympics in 2018.

Italy has been on fire through three days of the 2022 FINA World Championships in Budapest, with 17-year-old Benedetta Pilato winning the nation’s third gold medal of the meet with a 1:05.92 in the 100 breaststroke.

Pilato is the youngest Italian swimmer to win gold at the world aquatics championships, breaking the record of Novella Calligaris who won the women’s 800m freestyle in 1973 at age 18. 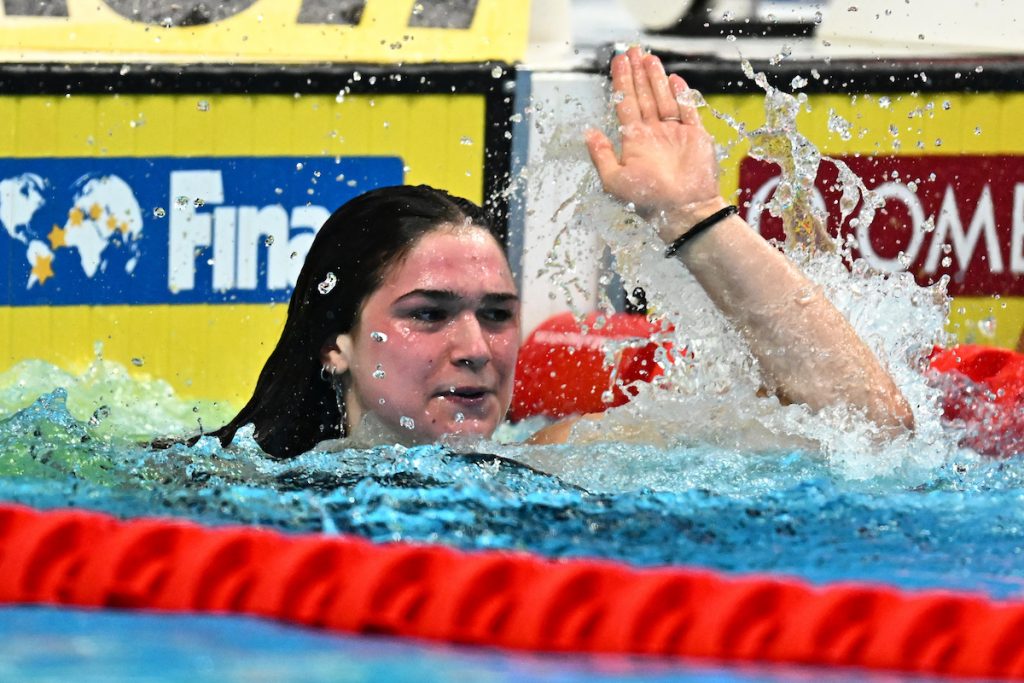 Pilato’s swim gives the Italians a sweep in the 100 breaststroke after Nicolo Martinenghi’s gold last night in the men’s race.

Elendt is the first German woman to claim a medal in this event at the world aquatics championships since Jana Dörries (silver) in 1991.

The main story of the race was the return of Meilutyte. The former world record holder was the world champion in 2013 when she was 16 years old and had initially retired from the sport in 2019 at age 22. It seemed that swimming had seen the last of her – after an Olympic gold medal at age 15, a world record and a world champs title at 16, she had achieved a lot in the sport. So what brought her back?

Three years later, she made her way back to the podium after holding the unofficial lead at the 75-meter mark. As for expectations heading into Budapest, a podium wasn’t a part of that until she qualified for the final in fourth place.