Germany’s 2020 Tokyo Olympic Marathon Gold medalist Florian Wellbrock was the engine for his nation’s victory on Lupa Beach just 20 mins from the Duna Arena in Budapest. In the final sprint, Wellbrock found a clear path to the touchpad securing his team’s victory in the inaugural Mixed 4x1500m Team Relay. Wellbrock stopped the clock at 1:04:40.5. Finishing 2.5 seconds behind was the quartet from Hungary, the Kristof Rasovszky-anchored host nation narrowly defeating Italy closer Gregorio Paltrinieri in a photo finish for second place.

The German team led off with a 16:21.1 split from Lea Boy who passed the timing gate only 2.6 seconds behind Cho Cheng-Chi (TPE) who led the first lap. Oliver Klemet timed his entry in the water from the exchange pontoon just as BOY touched the pontoon and he quickly put his team into the lead. Leonie Beck was next into the water for Germany and gave way only to three male swimmers from Hungary, Italy and France during the third loop.
Wellbrock left the exchange pontoon in the fourth position and made his way up front to where Kristof Rasovszky of Hungary was leading the small group of elite swimmers that included Italy’s Paltrinieri and France’s Marc-Antoine Olivier. Within the first 400 meters, only Rasovszky was ahead by a scant three-tenths of a second.
Paltrinieri took the lead at the 5.1km mark, but the German strategist in Wellbrock let Rasovszky and Paltrinieri battle for the lead while he found his tempo and conserved energy for his final sprint. Only a little more than a second behind the Hungarian and Italian swimmers, Wellbrock initiated the final manoeuvres that would put him in his own lane for the final sprint. 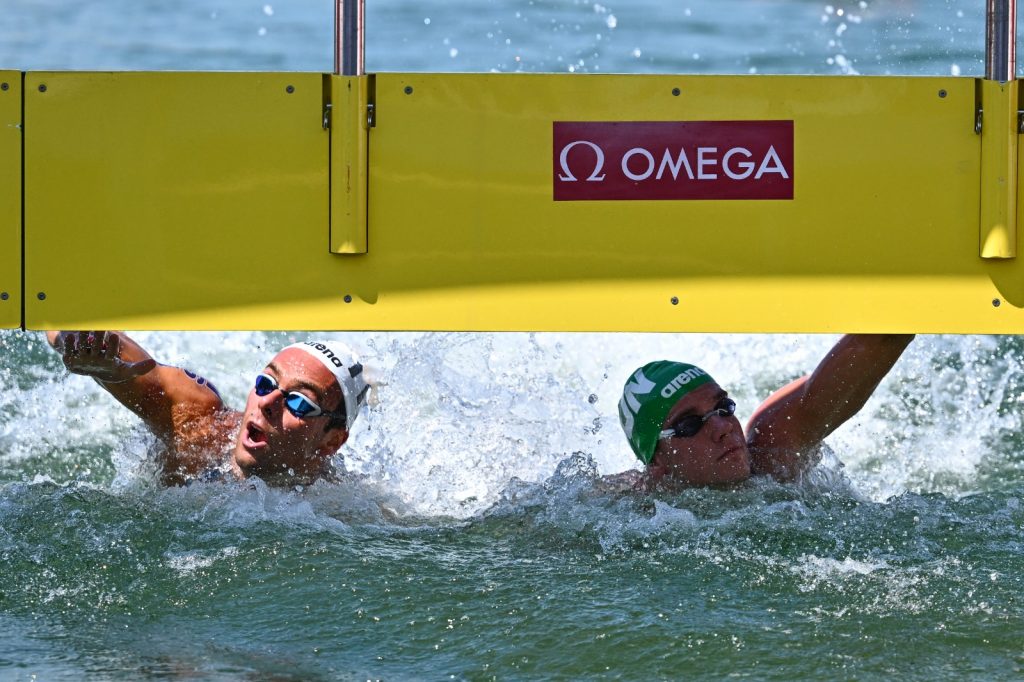 The German distance specialist is the Tokyo 2020 Olympic champion in the 10km Marathon and is the first athlete to win the gold medal in open water swimming and also in the pool event at the same edition of the FINA World Championships.  During the summer of 2019, he won the 10km in Yeosu, Korea and in the following week he won the 1500m freestyle event in the pool at Gwangju.

At Duna Arena, he finished second in the 800m freestyle.  Less than 24 hours ago he placed third in the 1500m freestyle event which was won by Paltrinieri in a new championship record time, the second-fastest swim in event history.

Hoping for a home nation victory Rasovszky couldn’t quite match Wellbrock’s turn of pace as the Hungarian swimmer replayed the final leg.

Rasovszky battled Gregorio Paltrinieri in the final sprint, with judges and Omega timing needed to determine the finishing photo order.  The Italian swimmer admitted that he had nothing left to give after winning the 1500m in a thrilling swim against the clock less than 24 hours prior.